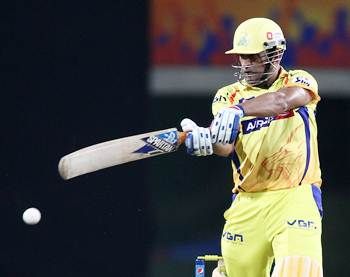 Mahendra Singh Dhoni reaffirmed his reputation as the best finisher in limited-overs’ cricket with yet another fluent knock as the Chennai Super Kings beat Rajasthan Royals by five wickets in the IPL match in Ranchi, on Tuesday.

Chasing a modest target of 149, Chennai won with two deliveries to spare as skipper Dhoni hit 11 runs, including a six, off James Faulkner's final over to seal the issue.

Ravindra Jadeja's 11 off six balls also was as important in the final context of the match. He also helped in restricting the Royals to a below par score with brilliant figures of two for 18 in four overs.

Chennai now occupy the top slot in the eight-team table with 16 points from 10 games, while Kings XI Punjab, with 14 from nine games, are second.

Despite the defeat, Rajasthan, with 12 points from 10 games, are placed third and firmly in contention for a play-off berth.

Smith hit a couple of straight sixes off Faulkner and was involved in a 35-run partnership with Du Plessis, who was having problems with running between the wickets.

While Smith mistimed a pull-shot off Kevon Cooper and was caught by wicketkeeper Dishant Yagnik, Ravichandran Ashwin (14) was done in by a customary slower delivery from Rajat Bhatia.

However, Chennai’s batting depth again came to the fore as Dhoni's presence ensured for the umpteenth time they successfully chased down a target in the death overs.

Earlier, skipper Shane Watson came up with his best score of the season - a fiery 51 – before Rajasthan lost momentum midway through the innings.

Watson's decision to promote himself to the opening slot paid dividends as he emerged Rajasthan’s top scorer with a 36-ball knock that was studded with four sixes and three boundaries.

They were going steady and strong, reaching 84 for one at the half-way mark, but lost wickets in a heap after that as the batsmen tried to step up the gas.

Except for a 60-run stand between Watson and his young opening partner, Ankit Sharma (30), Rajasthan failed to put up partnerships and that pulled them down.

West Indies leg-spinner Samuel Badree opened the bowling for Chennai and bowled a superb three-over spell, conceding just 11 runs. He bowled a tight wicket-to-wicket line and Watson and Ankit Sharma had to play the bowler on merit.

The left-handed Ankit made a promising start, offering straight-bat shots to Mohit, hitting the paceman for two consecutive boundaries. The youngster then showed his aggressive side by plundering 17 runs off Ravichandran Ashwin's over, hitting the experienced spinner for two fours and a six.

Ashwin returned and had his revenge, having the youngster caught near the ropes.

Watson was cautious initially even though he was striking the ball well. The burly Australian exploded later as he punished debutant Vijay Shankar, reeling off 19 runs in the 10th over to take the team's score to 84 for one.

Ajinkya Rahane (4) was needlessly run-out in a terrible mix-up with his captain, who later completed his fifty with a big hit off Mohit but was bowled immediately off a beauty that swung from good length to shatter the stumps.

Rajasthan’s downfall started with Watson's wicket as they kept losing one batsman after another. Their last match's heroes, Steve Smith (9) and James Faulknar (1), also returned to the dug-out cheaply.