Chennai Super Kings produced a clinical performance to crush Delhi Daredevils by 93 runs and register their first win in the seventh edition of Indian Premier League in Abu Dhabi on Monday.

Chennai first rode on Suresh Raina's fine half-century and a late burst from skipper Mahendra Singh Dhoni to post a competitive 177 and then came up with a disciplined bowling and fielding effort to bundle out the Daredevils for a paltry 84 in 15.4 overs. 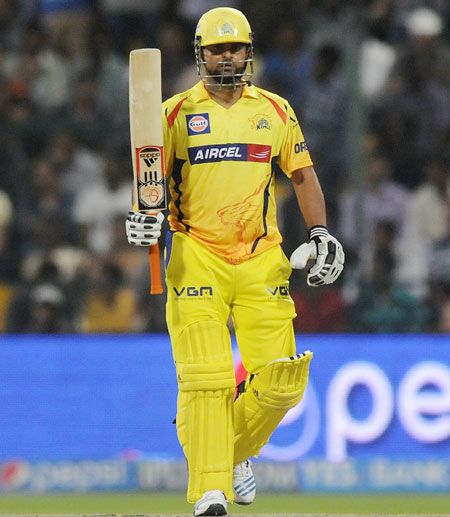 Raina made 56 off 41 balls during which he struck five boundaries and one six. He shared 54 runs off 46 balls for the second wicket with Dwayne Smith to lay the base for the total.

Towards the end, skipper Dhoni used his long handle to great effect to race his way to 32 off just 15 balls with the help of two fours and as many sixes. Faf du Plesis also made a useful 24 off 17 balls.

Chasing the target, the Daredevils witnessed a nightmarish start as they lost half of their side with just 50 runs on the board in the 10th over.

The Delhi outfit's chase never really got going at they lost wickets at regular intervals to reel for major part of their innings. Ishwar Pandey impressed his IPL debut. He struck the first blow for Chennai in only his second over by removing Mayank Agarwal. Agarwal was brilliantly caught by a running Raina at cover as the batsman went for an inside-out shot.

Murali Vijay (11) and Manoj Tiwary too did not help their side's cause as they departed in the next two overs. While du Plesis pulled off a stunner to sent packing Vijay off Mohit Sharma's bowling, the South African pounced on another skier in Pandey's next over to remove Tiwary.

Skipper Dinesh Karthik (21) and J P Duminy (15) tried to resurrect the Daredevils' chase with a 25-run stand for the fourth wicket but it was not to be as wickets continued to tumble like pack of cards.

Duminy was caught plumb in front of the wicket by Dwayne Smith of his first ball before Ben Hilfenhaus induced an edge from an out-of-form Ross Taylor which was gleefully accepted by Dhoni.

Karthik was then cleaned up by Ashwin in the 13th over. Jimmy Neesham (21 off 15) tried hard but the asking was too tall to achieve as Chennai bowlers ran through Delhi's tail with consummate ease.

Earlier, Chennai made a relatively quiet start to their innings after electing to bat as they scored their 50-run mark off exactly the same number of balls. Chennai, however, suffered their first blow in the fourth over in the form of dangerous Brendon McCullum (9).

The hard-hitting Kiwi batsman failed to latch on to a life provided by Duminy off Jaydev Unadkat's first delivery and perished in the next ball, caught by substitute Wayne Parnell at short thirdman.

After McCullum's dismissal, Raina and Smith played cautiously to build the innings together and help Chennai make 65 runs for the loss of one wicket at the halfway mark.

After taking a close look of the wicket, Raina finally opened up and clobbered left-arm spinner Shabaz Nadeem straight over his head for the first six of the innings.

But Chennai suffered their second blow in the last ball of the 11th over when Smith was cleaned up by Nadeem. The wicket hardly had any impact on Raina as he smacked Murali Vijay for three fours in the next over.

Raina brought up his half-century in the next over off 36 balls with the help of five fours and one six. But soon after Raina departed in search of quick runs. He was caught by Vijay at long-on off Neesham.

Then came in Dhoni and he made his intentions clear from the onset by smacking Unadkat for six and four in consecutive deliveries of the 17th over.

Dhoni was going great guns before he found Agarwal at the square-leg boundary off Unadkat's bowling. Mithun Manhas made a quick five-ball unbeaten 12. 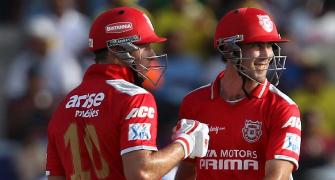 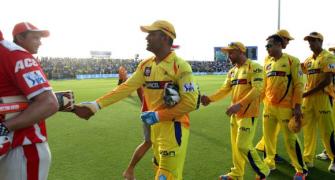 We were beaten fair and square: Dhoni 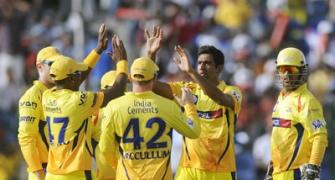 Chennai Super Kings look to bounce back against a resurgent Delhi