IPL-6 Fixing: Court to pass order on charge on June 29 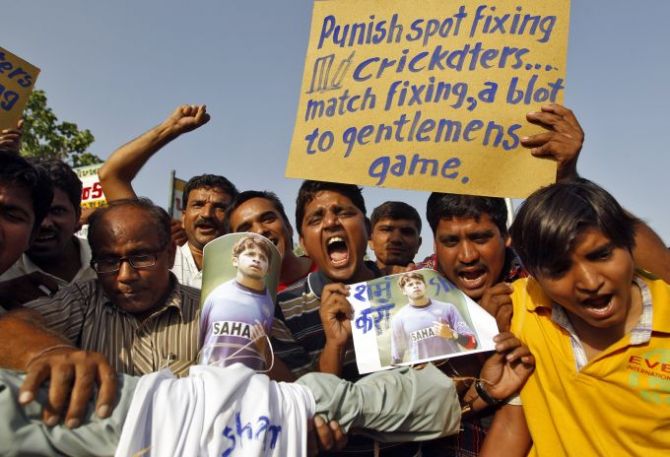 Demonstrators shout slogans as they hold a placard and posters of former India Test bowler Shanthakumaran Sreesanth during a protest in Ahmedabad. Photograph: Amit Dave/Reuters

A Delhi court said it would pass on June 29 its order on framing of charges in IPL-6 spot fixing scandal case in which suspended cricketers S Sreesanth, Ajit Chandila, Ankeet Chavan and others, including underworld don Dawood Ibrahim and his aide Chhota Shakeel, are accused.

Additional Sessions Judge Neena Bansal Krishna, who was scheduled to pass the order on charges, deferred it saying some of the defence counsel have not yet filed their written arguments in the case.

The court directed the accused to file written arguments, if any, by June 6.

Special Cell of Delhi Police had chargesheeted 42 accused in the case out of which six are absconding.

The probe conducted by the police in the case had earlier come under scrutiny of the court which had questioned its theory of "match fixing", saying there was prima facie no evidence showing that matches were fixed by the accused. During the arguments on framing of charges, the police had referred to the telephonic conversations among the accused claiming they were involved in match-fixing and betting.

The police had alleged that call detail records in the case clearly reflect the linkage of accused persons who were part of a crime syndicate to generate money.

Countering the arguments advanced by police, the counsel appearing for the accused had argued that police had failed to show commission of any prima facie offence by the accused in the case. 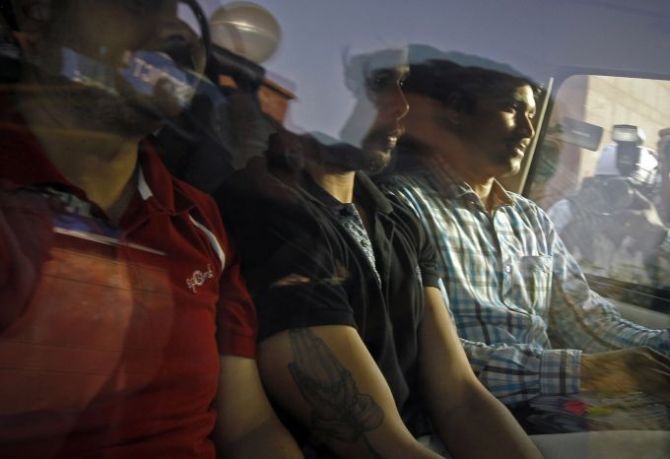 S Sreesanth (C) is pictured through the window of a car as he leaves a court in Delhi. Photograph: Anindito Mukherjee/Reuters

The defence counsel had also argued that there was prima facie no evidence to frame charge in the case.

The court had earlier declared Dawood and Shakeel as proclaimed offenders as they are evading arrest in the matter. Police had earlier told the court that properties of Dawood and Shakeel in Mumbai have already been attached in connection with the 1993 Mumbai serial blasts case and that they have not visited India since 1993.

Police had submitted that Dawood had properties in his name at Dongri in Mumbai whereas Shakeel owned property in Nagpada there.

The court had earlier issued NBWs against Dawood and Shakeel, Pakistan-based Javed Chutani, Salman alias Master and Ehteysham, who all are considered to be Dawood's associates.

The police had filed a 6,000-page charge sheet against the accused in the case. It had also filed supplementary charge sheet later on.

The court had earlier granted bail to Sreesanth, Chavan and various others accused for lack of evidence against them under the provisions of stringent Maharashtra Control of Organised Crime Act (MCOCA).

The police, in its charge sheet, had claimed that Dawood and Shakeel, who have been "controlling the fixing and betting market" in cricket in India, were behind IPL spot-fixing.