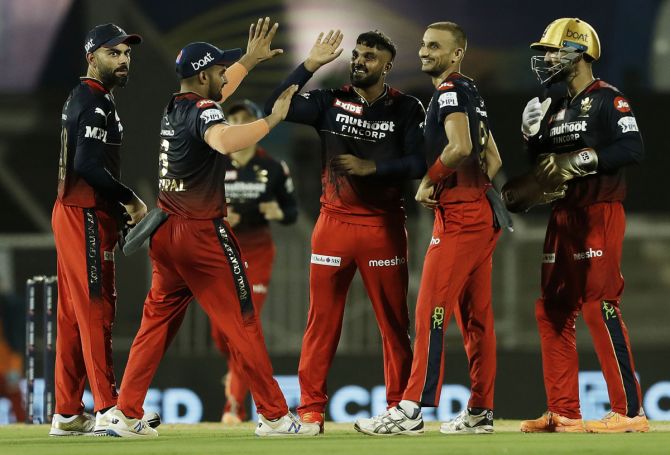 IMAGE: With back-to-back wins, RCB had the momentum going their way but that fizzled out after a big 54-run loss to Punjab Kings in their last match. Photograph: BCCI

Runaway leaders Gujarat Titans would look to continue their winning momentum ahead of the play-offs while Royal Challengers Bangalore need a big victory to keep their last-four stage hopes alive when the two teams face each other in their final IPL league match in Mumbai on Thursday.

Newcomers GT have so far had a dream opening season as they are already assured of a top spot in the standings with 20 points from 13 games.

RCB, on the other hand, have had a mixed bag this season, registering seven wins and six losses to occupy the fifth spot with 14 points from 13 matches.

But what could hurt RCB is their net run rate of -0.323. A win against GT would move them to 16 points but that might not be enough as they also need a few favourable results going their way.

Delhi Capitals, who are currently at fourth spot, can also secure 16 points if they beat Mumbai Indians in their last match and they have a much better net run rate than RCB at +0.255.

With back-to-back wins, RCB had the momentum going their way but that fizzled out after a big 54-run loss to Punjab Kings in their last match.

Virat Kohli's woeful run continued as he managed just 20 in the last match but the stage is set for the former India captain to play an impact knock to make a turnaround in his form and the fortunes of RCB.

Skipper Faf du Plessis, Mahipal Lomror and Dinesh Karthik would also be looking to play a big knock after their bats remained silent in the last few games.

Glenn Maxwell and Rajat Patidar have been getting starts but failed to convert them into big scores.

On the bowling front, Harshal Patel and Wanindu Hasaranga have been brilliant for RCB. In fact, when all other bowlers were taken to task by Punjab batters in their last match, the duo bowled decent spells and in the process picked up four and two wickets respectively.

RCB, however, would be concerned over the form of Josh Hazlewood and Mohammed Siraj as they leaked runs against Punjab.

But du Plessis would be hoping for one complete performance from his side to keep RCB in the hunt.

GT, on the other hand, are the side to beat in this IPL. Even if they lose on Thursday, the Hardik Pandya-led side will finish at the top, which means it will get two chances to reach the final.

For GT, the key to success in their inaugural season has been the team effort.

The batting unit has been complemented superbly by a lethal bowling attack led by experienced Mohammed Shami and has the likes of young Yash Dayal, Lockie Fergusson and Alzarri Joseph.

GT's spin department is being led by none other than Afghan star Rashid Khan, who has got much-needed support from R Sai Kishore.