IMAGE: Gujarat Titans are clearly the team to beat in the competition having won eight out of nine games. Photograph: BCCI/IPL

Gujarat Titans, who have been remarkable in bouncing back from adverse situations, would look to seal a spot in the Play-offs when they clash with inconsistent Punjab Kings in the Indian Premier League (IPL), in Navi Mumbai, on Tuesday.

Gujarat, the IPL debutants, are clearly the team to beat in the competition having won eight out of nine games. A sixth consecutive win will make them the first side to enter the play-offs.

A big reason for Gujarat's stellar run has been their ability to come back from tough situations.

Whether it is Rahul Tewatia, David Miller, Rashid Khan or skipper Hardik Pandya -- they all have produced match-winning efforts during the course of the tournament. If one has failed, the other has risen to the occasion.

"That's the beauty of this team, people coming in and showing what they can do in clutch situations is becoming quite a habit, something I don't mind happening. We always back them to do it, but they're defying odds time and again," Hardik's words after the win over RCB summed up his team's spirit aptly.

The last time Gujarat and Punjab met, they produced a cracking finish with Tewatia bringing his team back from the dead by smashing two sixes off the last two balls of the game.

Punjab would hope to be on the right side of the result and that the game doesn't go deep. They are in the middle of another inconsistent campaign and with five losses in nine games and are running out of time.

Their senior batters, captain Mayank Agarwal himself, Jonny Bairstow, Shikhar Dhawan and Liam Livingstone have done well in patches but have not been consistent enough.

Barring pacer Arshdeep Singh, who seems to be getting better with every game, the bowling department can also do better. They did well in the previous game but the batters flopped to let the team down.

For Titans, wicket-keeper Wriddhiman Saha has been a great replacement for a struggling Matthew Wade.

His opening partner Shubman Gill has had starts but of late the elegant right-handed batter hasn't been among the runs and considering his potential, he would be keen to get back to form.

The batting mainstay for Gujarat has been Hardik, who has played responsible knocks, and with 308 runs is the third highest run-scorer.

A rare failure in the last game against the RCB shouldn't bother the flamboyant all-rounder.

Their weak link is number three B Sai Sudharsan and he needs to take more responsibility along with Miller, who has been playing the role of a finisher to perfection.

Miller has taken the team over the line and along with Tewatia, who can hit sixes at will, is a formidable batter to have at the business end of the innings.

Another important cog for Gujarat is all-rounder Rashid Khan, who has also displayed his six-hitting prowess, to go with his crafty bowling.

Miller, Tewatia and Rashid have together hit 28 sixes and will be expected to keep doing the job.

Gujarat also have one of the most lethal attacks in the IPL.

While Mohammed Shami can wreak havoc with the new ball, the big-hitters in the Punjab line-up would be wary of the pace and variety which Lockie Ferguson brings with him.

They can also continue with Pradeep Sangwan, who returned with fine figures in his first IPL game after four seasons. 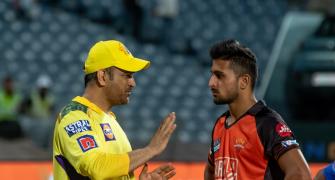 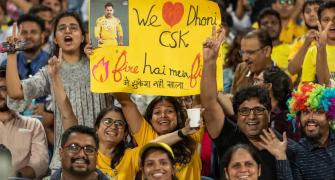 How They Love Thala! 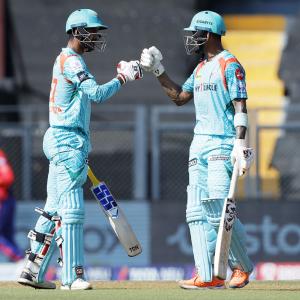