IMAGES from the IPL 2022 game between Rajasthan Royals and Lucknow Super Giants in Mumbai on Sunday. 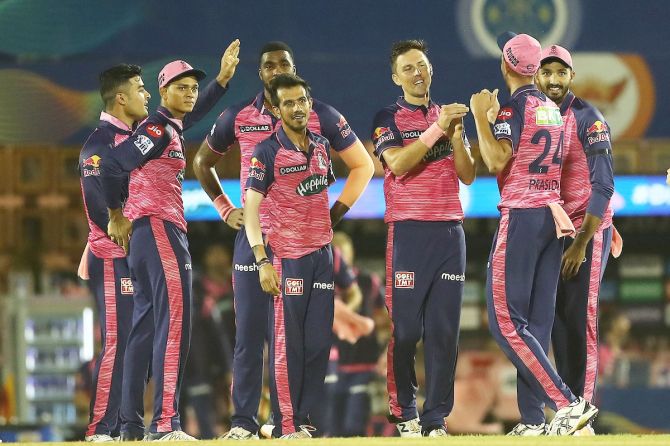 A clinical Rajasthan Royals inched closer to securing a play-offs berth with a convincing 24-run win over Lucknow Super Giants in the Indian Premier League, in Mumbai, on Sunday.

Both RR and LSG are now tied on 16 points from 13 matches and need another win to confirm their place in the next stage of the tournament. Thanks to their margin of victory, RR also toppled LSG from the second place.

Batting first, Yashasvi Jaiswal top-scored with 41 while Devdutt Padikkal blazed away to an 18-ball 39, as Rajasthan Royals posted 178 for six. Skipper Sanju Samson made 32 off 24 balls.

Ravi Bishnoi was the most successful bowler for LSG, picking 2/31 in four overs.

When their turn to bat came, LSG were stopped at 154 for eight.

The Super Giants got off to a terrible start as Trent Boult (2/18) sent back two of their top batters -- Quinton de Kock (7) and Ayush Badoni (0) -- in successive deliveries in the beginning of the third over.

De Kock was caught at point by an agile Jimmy Neesham, while Badoni was trapped in front of the wicket, after which the batter opted for a review to clear his doubts. 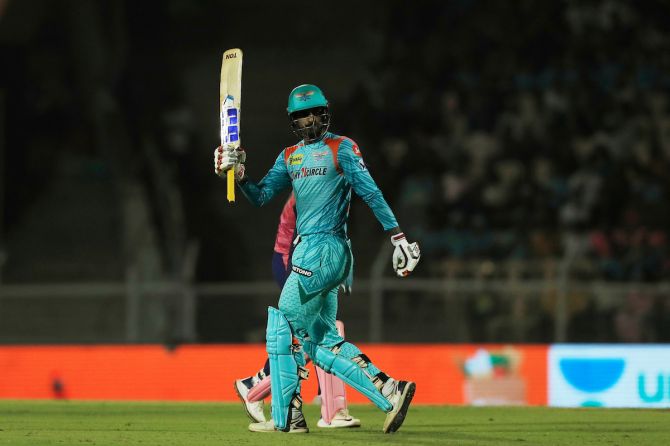 Deepak Hooda (59 off 39 balls) denied Boult a hat-trick -- the ball headed towards the slip but after one bounce.

In the next delivery though, Hooda got off the mark with a beautiful drive through covers.

However, KL Rahul (10) struck Prasidh for a six to begin the final power play over but the bowler had the last laugh as he had the LSK skipper caught with his smart bowling.

LSG were in deep trouble at 29 for three in the sixth over when Krunal Pandya joined Hooda in the middle.

The two quickly added 65 runs for the fourth wicket to keep their team in the game, before Ravichandran Ashwin removed Pandya at a crucial juncture, thanks to some excellent work by Jos Buttler and Riyan Parag in the deep.

Meanwhile, Hooda brought up his fifty but Yuzvendra Chahal had the charging batter stumped after Sanju Samson nearly made a hash of it.

Obed McCoy (2/35) then picked up the wickets of Jason Holder and Dushmantha Chameera to take RR closer to victory. 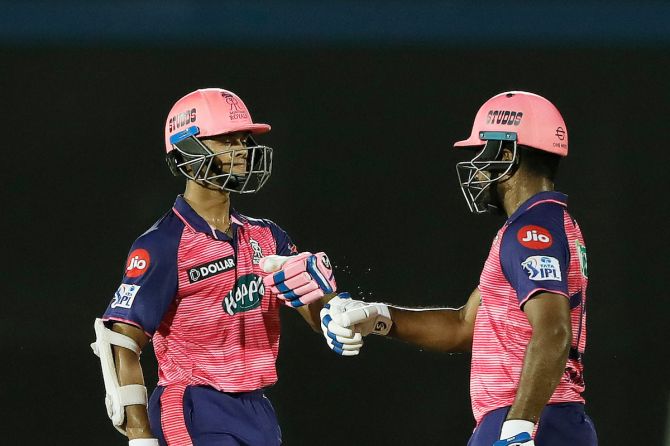 Earlier, Yashasvi Jaiswal top-scored with 41 while Devdutt Padikkal blazed away to an 18-ball 39 as Rajasthan Royals posted 178 for six.

Skipper Sanju Samson made 32 off 24 balls after he opted to bat.

Ravi Bishnoi was the most successful bowler for LSG, picking 2/31 in four overs.

Jaiswal started the proceedings for Royals on a confident note, hitting successive fours off Mohsin Khan in the first over. 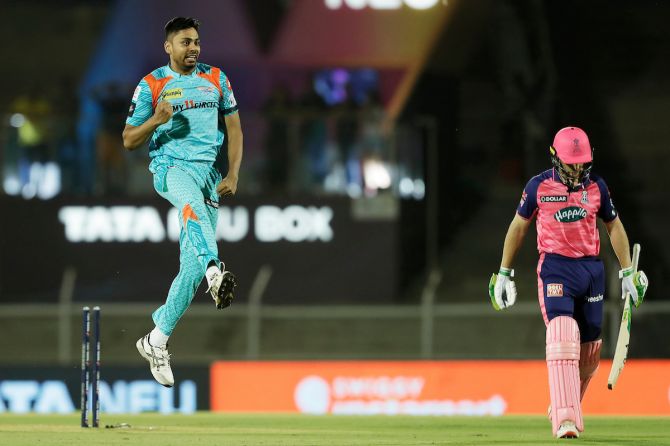 But the RR soon suffered a body blow when Avesh Khan knocked over the in-form Jos Buttler's (2) off-stump in the beginning of the third over as the batter tried to scoop it over fine leg.

Buttler's early dismissal brought skipper Sanju Samson into the middle and, looking to regain his touch, he straightaway got into the act, flicking Avesh past midwicket for a boundary at the Brabourne Stadium.

Samson then played a late cut against Mohsin and the ball flew over the slip cordon for a boundary. Then came a lovely cover drive from the blade of the RR captain as the team reached 25 for one in four overs.

Meanwhile, after getting an awkward boundary, Jaiswal got a life when Mohsin dropped him off the bowling of Avesh, failing to hold on to the ball despite getting both hands to it.

LSG paid heavily for the profligacy on Mohsin's part as Jaiswal made full use of the reprieve, accumulating 21 runs off Dushmantha Chameera to lift RR to 51 for one in the six power play overs.

He began the over with a four, found the fence two more times, and then finished it in style, carting the Sri Lankan pacer's short ball for a massive six over the midwicket region. 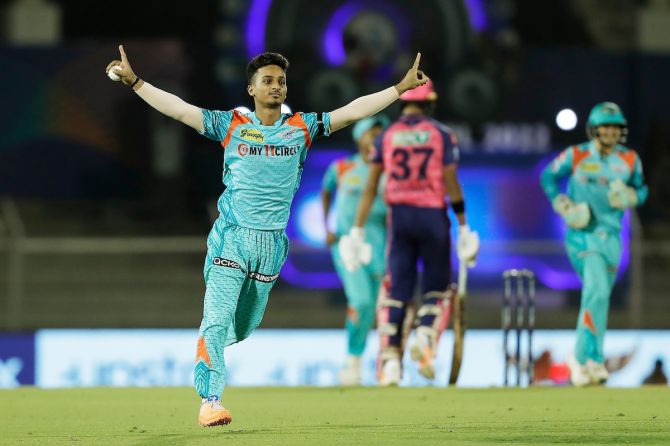 Even as Jaiswal went after the bowling, the usually flamboyant Samson seemed content playing second fiddle.

Samson, however, looked to cut loose against Ravi Bishnoi as he hit him for two fours before Jason Holder brought about the former's downfall in the next over with a slower ball outside off for Deepak Hooda to take a catch in the deep.

Devdutt Padikkal came and raced to 14 off 5 balls, with the help of two fours and a six against Marcus Stoinis.

Padikkal then scored two boundaries off Chameera as RR crossed 100 in the 11th over.

However, at the other end, Jaiswal was out caught and bowled by Ayush Badoni. But, unperturbed by the loss of the set Jaiswal, Padikkal continued to play his shots and got a six off Krunal Pandya.

Going for one too many though, Padikkal hold out in the deep. 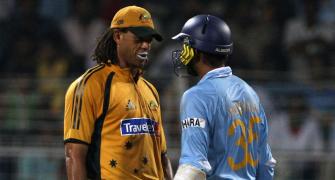 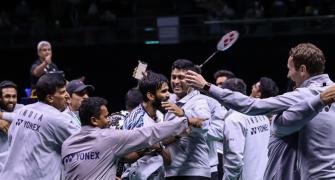 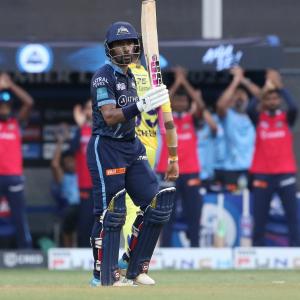 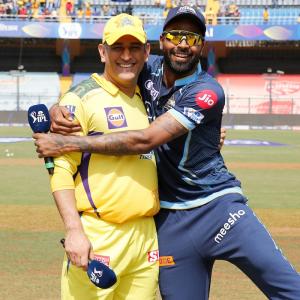