IMAGES from the IPL match played between Gujarat Titans and Lucknow Super Giants in Pune on Tuesday.

Gujarat Titans returned to winning ways after back-to-back losses and became the first team to seal their place in the play-offs by defeating Lucknow Super Giants by 62 runs in an Indian Premier League match in Pune on Tuesday.

Even though LSG did a decent job with the ball to restrict GT to 144 for 4 after being asked to bowl, the KL Rahul-led side flopped with the bat as they were bowled out for 82 in 13.5 overs.

GT sealed their play-off berth, reaching 18 points from 12 games. The defeat snapped LSG's five-match winning streak but they are still comfortably placed in the second spot with 16 points and need just a win to book their last-four berth.

LSG made a slow start to their chase and their problems were further compounded after they lost Quinton de Kock (11) and skipper KL Rahul (8) in consecutive overs to slump to 24 for 2 after four overs.

While Yash Dayal accounted for De Kock, Rahul top-edged a Mohammed Shami short delivery to Wriddhiman Saha behind the stumps.

Debutant Karan Sharma didn't help his cause either, handing a catch to David Miller inside the circle to give Dayal his second scalp of the day.

Introduced into the attack in the eighth over, Rashid Khan struck with his third delivery, foxing Krunal Pandya with a googly and Saha was quick to whip off the bails.

With wickets falling in quick succession from the start, LSG never got any momentum to their chase, reaching 58 for 4 at the halfway stage.

The ever-rising asking rate led to the downfall of Ayush Badoni (8), who was stumped by Saha off R Sai Kishore.

LSG's scorecard cut a sorry figure as the likes of Marcus Stoinis (2) and Jason Holder (1) too failed to rise to the occasion.

Deepak Hooda top-scored for LSG with a struggling 26-ball 27. 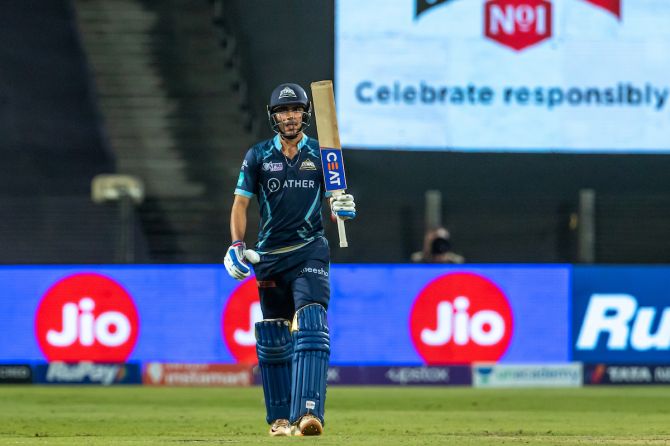 Gill remained not out on 63 off 49 balls with the help of seven fours but lacked support from the other end. He was left stranded as GT's next highest scorer was David Miller (26). 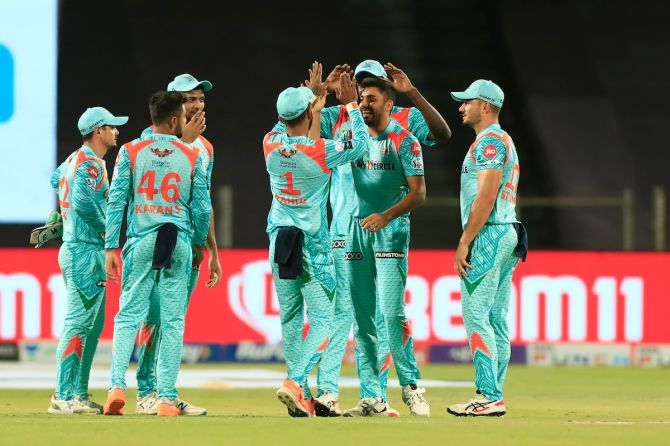 GT's decision to bat first after winning the toss backfired big time as they lost Wriddhiman Saha (5) and Matthew Wade (10) cheaply with the scoreboard reading just 24 inside five overs.

With wickets tumbling from the other end, Gill went about his business cautiously and in the company of skipper Hardik Pandya shared 27 runs for the third wicket before the latter departed, edging one to Quinton de Kock behind the stumps to give Avesh his second wicket of the day.

Once Hardik departed, Gill took the onus on himself and upped the ante, first chopping Avesh to the square boundary and then reverse-swept Krunal Pandya to the third-man fence in the next over.

But thereafter, both Gill and Miller failed to free their arms as Mohsin and Krunal bowled tight line and length to stem the run flow.

Miller finally broke the shackles in the third delivery of the 16th over with a huge six off Jason Holder over extra cover, in what was the first maximum of the innings.

Miller, however, perished in the final ball of the over, caught by Ayush Badoni as he slashed one straight to deep third man.

Gill, on the other hand, went about his innings in a smooth fashion and brought up his fifty in 42 balls with a single off Dushmantha Chameera.

Once he reached his fifty, Gill opened up and struck Chameera for back-to-back boundaries to pick up 14 runs from the 17th over.

Rahul Tewatia (22 not out off 16 balls) used the long handle to good effect in the final over, smashing Holder for three boundaries to take the score close to the 150-run mark.