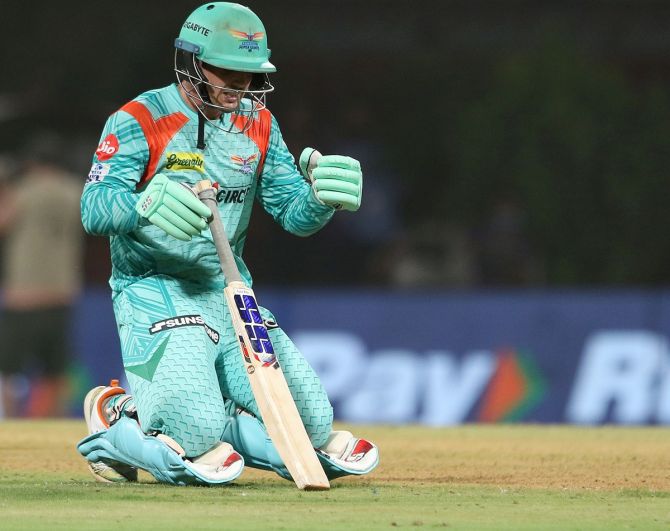 A blistering century by Quinton de Kock and an attacking half-century by K L Rahul saw the Lucknow Super Giants defeat the Kolkata Knight Riders by two runs in a nerve-wracking match at the D Y Patil stadium in Navi Mumbai on Wednesday, May 18, 2022.

The South African wicket-keeper-batter, who came over to debutants LSG from five-time champions Mumbai Indians this season, brought up only his second hundred in the IPL, having smashed a 51-ball 108 not out for Delhi Capitals (then Delhi Daredevils) against Royal Challengers Bangalore.

De Kock entered Wednesday's game on the back of a couple of low scores and was dropped by Abhijeet Tomar off Umesh Yadav's bowling while batting on 12.

The 29 year old made KKR pay dearly for that mistake as he would add another 128 runs to finish unbeaten 140 off just 70 balls, surely one of the best batting performances in the league's history.

The KKR bowlers were up against a de Kock hitting everything that came his way -- be it pace or spin. After he got his hundred, the usually undemonstrative de Kock kneeled on the pitch seemingly in prayer before punching the air in glee.

In the LSG players's stand, Sasha Hurly raised their daughter Kiara, all of five months old, to see her dad make history. Sasha, visibly thrilled by her husband's hundred, and accompanied either by her mum or de Kock's mother, couldn't stop grinning as Quinton made his way to the dressing room.

De Kock abruptly retired from Test cricket in the middle of the series against India, citing the need to spend more time with his family.

Sasha and Quinton's love story began after the 2012 Champions Trophy game between his then team, the Highveld Lions, and the Mumbai Indians. Sasha, then a cheerleader, congratulated Quinny on the win, Cupid shot his arrow and they wed in 2016.