Royal Challengers Bangalore needed a big win to stay alive for a spot in the play-offs and they did it and how!

RCB bowlers did well to tie a noose around Gujarat Titans batters after the table-toppers were given a good start by Wriddhiman Saha.

After Saha's run-out, David Miller and Hardik Pandya did the rebuild, but in the middle overs there weren't any free-flowing big shots. Except for the 14th over where Glenn Maxwell erred, where Miller and Hardik took him for 18 runs, the other overs were tightly bowled.

Siddharth Kaul did well to mix his deliveries, bowling his off cutters, and slower ones to deceive the batters. Spinner Wanindu Hasaranga was also conservative, giving just 25 runs in his spell with one wicket.

From overs 15 to 18, only 25 runs were scored with Miller and Rahul Tewatia dismissed.

And now chasing 169 for victory, RCB needed to press on the accelerator to not just register a win, but win with an eye on their net run-rate.

IMAGE: Virat Kohli was dropped on 16 and went on to make a match-winning 73. Photograph: BCCI

RCB got off the blocks in a jiffy as Virat Kohli and Faf du Plessis got to 26 for no loss in just three overs. In the next over bowled by Hardik, Kohli played the first ball watchfully before getting a four off a thick inside edge.

Kohli then got a life the next ball when Rashid Khan misjudged a catch at square leg when the RCB veteran was on 16.

The RCB bowlers did well to turn the screws on the well set pair of Miller and Hardik not allowing big hits for the majority of the middle overs. Save for the last two overs by Kaul and Josh Hazlewood, that produced 34 runs, the RCB bowlers did what was expected of them.

Not only did Kohli take RCB to the cusp of victory before being stumped off Rashid's bowling, that early reprieve allowed him to find form as well as become the highest scorer in the IPL, going past the 7,000 run mark.

RCB will hope their win materialises into a spot in the play-offs, especially given the way their bowlers performed and Kohli getting his mojo back. 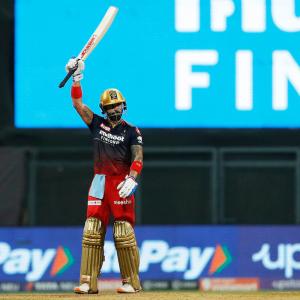