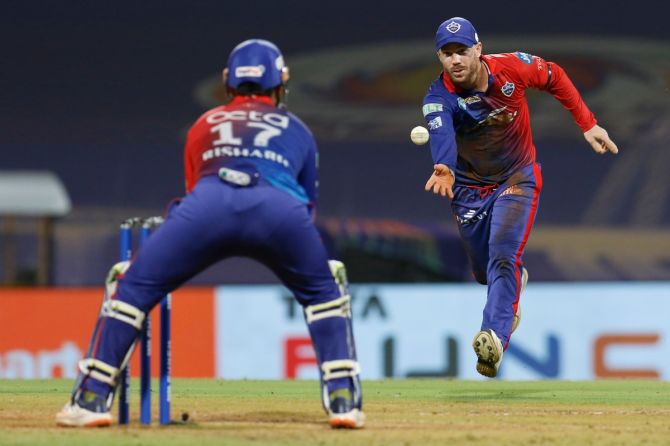 IMAGE: Delhi Capitals broke into the top four in the standings. Photograph: BCCI/IPL

Delhi Capitals' swashbuckling opener David Warner says he gets 'a buzz' out of his fielding.

Warner may have got out for a golden duck in the team's previous IPL match against Punjab Kings, but he made vital contributions in the field.

When asked about his outstanding fielding, Warner said, "There are two facets of the game for me - batting and fielding. I look to stop ones in the ring and take some catches near the boundary. Fortunately, I got one and it was a great result for us. I get a buzz out of fielding and I try to save runs for the bowlers."

Delhi Capitals broke into the top four in the standings after registering a 17-run victory over Punjab Kings on Monday.

Speaking about their performance, the Australian said, "The team has a never say die attitude. We are fighters and we play to the best of our abilities, whether it's with the ball or bat. There's a hunger and desire to help each other out as we care for each other."

Sarfaraz Khan, who played a blistering knock of 32 runs from 16 balls, said he enjoyed the role of an opener.

"I had never opened before the game against Punjab Kings so I was looking to enjoy the position. Before I got this opportunity, I had a feeling that I could bat well as an opener and things went according to plan against Punjab," Sarfaraz said.

The batter also motivated the team after their batting innings.

"I wouldn't have been happy if my innings wouldn't have helped the team win. The environment within the team is good and we have to play well in one more game to qualify for the playoffs."

"I was telling everyone in the team after our batting that it's only a matter of one wicket. If we get one wicket then we'll be in the game and we kept picking up wickets throughout Punjab's innings."

Sarfaraz also spoke about his father's impact on his cricket career.

"The credit goes to my father for whatever I am today. He has driven from Mumbai to Uttar Pradesh to take me for games along the way. We made stops in various places such as Madhya Pradesh, Ghaziabad, Mathura and Delhi so that I could play matches and my father has driven around 2500 km for me."

The Delhi Capitals will take on Mumbai Indians in their last league match at the Wankhede Stadium in Mumbai on Saturday.