Rahane's knock in vain as Delhi pull off win in humdinger

Ajinkya Rahane's superb 84-run knock went in vain as Delhi Daredevils pulled off a dramatic one-run win against Rajasthan Royals to open up a three-point lead at the top of the Indian Premier League in New Delhi.

Chasing a challenging 153 to win, Rajasthan required 15 runs off the last two overs but Morne Morkel and Umesh Yadav snatched the win for Delhi out of the jaws of defeat by conceding just 13 runs.

Morkel conceded just three runs in his penultimate over and also dismissed Brad Hodge (22) to turn the tide in the favour of Delhi.

Rajasthan needed two runs off the final ball after Rahane smashed Yadav for a six and took two in the fourth and fifth balls. However Rahane missed the last ball and Owais Shah was run out while attempting a single.

The unpredictability of the Twenty20 format was on display at its best as Rajasthan were running away with an upset win after the openers -- Rahane and his skipper Rahul Dravid (40)  put on a 99-run stand for the first wicket.

Rahane and Hodge then added 42 for the second wicket.

Delhi had put up a challenging 152 for six after Virender Sehwag smashed a 63 off 39 balls at the top and Yogesh Nagar (27) provided the fireworks in the end.

With his knock Sehwag became the only batsman in the history of IPL to score four consecutive half-centuries.

Rajasthan's bowling was tight and except the last over when they leaked 20 overs, they made the formidable Delhi batting line-up to work hard for runs. 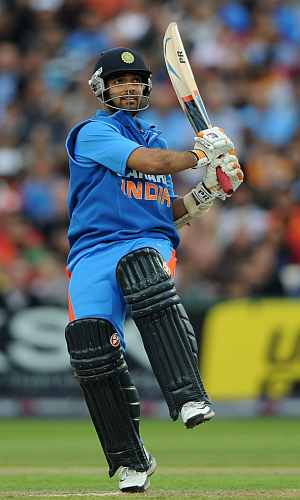 It was a difficult wicket for stroke-making but Rahane and Dravid read the track well and responded to the challenge sensibly. They kept finding boundaries but never attempted shots which risked losing wicket.

However, despite all the hard work, victory slipped out of their hands as they finished 151 for three.

Even when Ajit Agarkar's athletic catch, offered by Dravid, in the deep off Irfan Pathan broke Rajasthan's opening wicket stand, the visitors were favourties to win.

Earlier, Pankaj Singh (2/25) and Amit Singh (2/41) shared four Delhi wickets between them while Kevon Cooper did a fantastic job by conceding just 19 runs in his four overs.

Sehwag was his usual attacking self as he blasted 63 off 39 balls after electing to bat, but the ball was not coming on to the bat and other Delhi batsmen struggled to score quickly.

Apart from Sehwag Yogesh Nagar (27) and Ross Taylor (25) contributed to the total.

It was Nagar, who took Delhi past the 150-run mark when he hammered Amit Singh for two sixes and a four in the final over the innings before holing out in the penultimate ball.

Rajasthan bowler kept Delhi batsmen under pressure right from the start although Mahela Jayawardene had started off the Delhi innings with a four off Ankeet Chavan.

But the Sri Lankan recruit did not last long as he hit a full pitched delivery from Pankaj right into the hands of Brad Hogg.

Pietersen, who followed Jayawardene looked to carry on from where he left against Mumbai Indians, driving Chavan through covers to fetch his first boundary.

Chavan cut short his stay when he had the Briton caught by Dravid in slip region.

Sehwag on the other end was in sublime form as he cut and drove Royals' bowlers with ease. After flicking Pankaj through the mid-wicket to collect his first boundary, the Delhi-dasher never looked back raising his half-century in just 33 balls.

After a subdued start Sehwag opened up, dispatching Amit through fine-leg before lofting Kevon Cooper over mid-off for a six. His knock had eight fours and two sixes.

With Sehwag falling at a crucial juncture of the game, it was left to Taylor and Yogesh to carry the Daredevils to a respectable total. However, the Kiwi was bowled around his legs while trying to glance Pankaj, bringing an end to a rather painstaking effort of 25 of 35 balls.

Naman Ojha started off in style by hitting a huge straight six off Hogg but could not do much for his side.

Nagar though made sure that Delhi have enough runs to fight as he clobbered Amit for two sixes and a four before Irfan Pathan hit the last ball for a four. 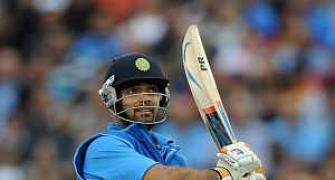 My focus is just on the controllable: Rahane 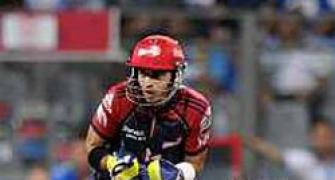 I am trying to perform in every tournament: Ojha
Can't win polls from national capital: Sonia 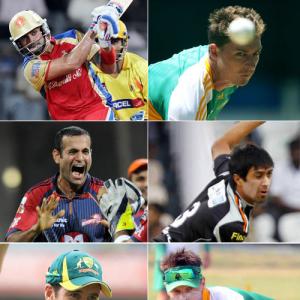 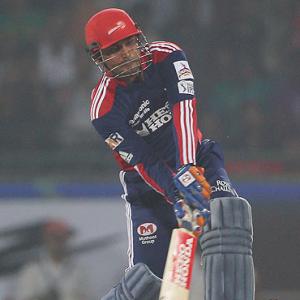