Royal Challengers Bangalore's campaign in the fourth edition of the Indian Premier League has been nothing short of a roller-coaster ride, with its share of ups and downs.

Victory in the opening match against Kochi Tuskers Kerala was followed by three straight defeats and a wash-out to Rajasthan Royals.

With just three points from five games they looked set for an early exit. 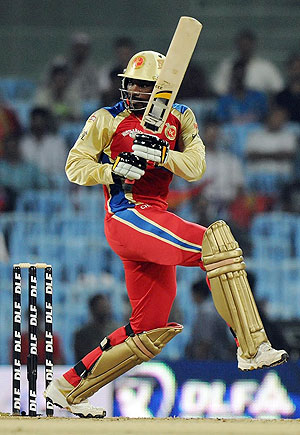 Then came Chris Gayle and the beaten finalists of 2009 won seven matches on the trot to get back into contention.

However, just when they were on the verge of being considered near invincibles, they came crashing down to an individual's brilliance -- Adam Gilchrist scored a spectacular hundred and took a blinder to dismiss Gayle and lead his Kings XI Punjab to a comprehensive win in Dharamsala.

Their final group match -- against Chennai Super Kings -- again resulted in a comprehensive win, helping them top the table.

However, when they faced the same opponents in the first play-off, the team from Bangalore came up second best. That left them with a lone option -- of beating an in-form Mumbai Indians and booking a place in the final.

They did that and how.

Bangalore thumped Mumbai by 43 runs to set up a third meeting with Chennai inside a week. Asked about his team's topsy-turvy ride to the decider, captain Daniel Vettori had a readymade response.

"It is the format of the game," he said, adding, "T20 is such a format that your game plan works on some days.

"And on others, it simply doesn't work."

So what was his team's game plan going to that all important play-off.

"We were aware of their (Mumbai Indians) ability to come hard at us," explained Vettori.

"Besides, in the match (first play-off) against Chennai, we saw how one guy (Suresh Raina) could stand up and take his team home," he added, before proceeding to elaborate his point.

"We played really well," said the New Zealander, adding, "The start -- by Chris Gayle and Mayank Agarwal --made the job easier for us.

"And we backed it up with some clinical bowling."

The Bangalore team's captain didn't buy the idea that his opposite number, Sachin Tendulkar, had gifted them a win by inviting them to bat first after winning the toss -- considering six of the seven teams in the tournament had won batting first on this venue.

"We wanted to bat first in any case," he retorted.

Vettori was also not too perturbed about his team's over-dependence on Gayle.

"He is doing the job for us on most occasions," he said adding, "In case he fails, there is Virat (Kohli) and AB (de Villiers) to take up the responsibility."

He, however, admitted that the defending champions, playing on their home ground, will be favourites going into the decider.

"The match will be played on the other pitch (different from the one used against Mumbai)," explained Vettori, adding, "And the other strip is slower

"It will suit them more and will obviously be to Chennai's advantage."

The New Zealander went on to admit that his team will go in to the match with an extra spinner, implying Syed Mohammad will get another opportunity (having foxed Sachin Tendulkar on Friday).

"You can be 99 per cent sure that we will be playing the same team," said Vettori. 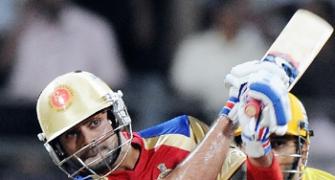 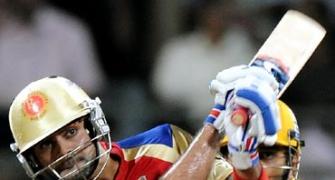 Images: Chennai down RCB to enter IPL final
A fresh set of records for Sachin Tendulkar 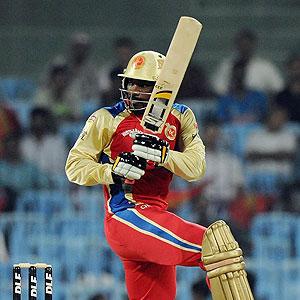 Mumbai eye encore of 2010 final with win over RCB