Chris Gayle (with a MVPI of 710) might already have done enough to become the most valuable player of IPL4. In just 7 matches, he has blasted 436 runs at a strike rate of 200. As if that isn't enough, he also has 6 wickets at a decent economy rate of 6.6.

In an IPL season where a player is considered a top buy if he costs $1000 for every 'run' scored, Gayle costs just $282 per run. And we haven't factored in his tremendous impact in swelling crowds at the cricket grounds and increasing eyeballs on TV. Is it then any surprise that Vijay Mallya declares that he will do everything it takes to retain Gayle's services next year for RCB?

Lasith Malinga (582) continues to knock down stumps almost as easily as Gayle hits sixes, and should easily retain his second place in the MVPI table. Virender Sehwag (564) might have offered him a challenge, but his IPL is over.

Paul Valthaty's hurricane 62 against DD confirms that his early swashbuckling performance was no flash in the pan. A Valthaty 'run' costs just $70 and KXIP must be delighted with this buy. Valthaty would happily exchange his orange cap (that he has regained) for the India cap. Given the funny BCCI auction rules, an India cap could have easily hiked Valthaty's price from our estimated $44,000 to $440,000 or even $880,000!

Ambati Rayudu (355) and Rahul Sharma (381) too must be disappointed that their excellent IPL performances haven't earned them India caps, which would have swelled their IPL price tenfold or more.

It is fashionable to call IPL a young man's name. To verify this hypothesis, we present two tables below featuring, respectively, the 20 best 'old' and 'young' players. We define anyone who is 30 or above as 'old' (now how cruel is that?) and anyone below 25 to be 'young'. We leave it to the reader to decide who won this contest; we think the oldies won. 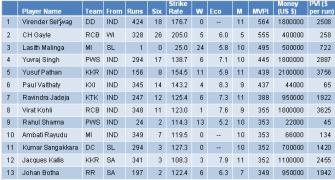 It's Sehwag versus Gayle in IPL-4 Malinga the most valuable in IPL-4