Deccan, Delhi to do battle for survival

Battling poor form and placed in the bottom heap of the points table, former champions Deccan Chargers and Delhi Daredevils square off in what promises to be an evenly-matched Indian Premier League contest at the Rajiv Gandhi International stadium in Hyderabad on Thursday.

A win in Thursday's clash is a must for both Deccan and Delhi to keep their hopes alive of advancing further in the tournament and salvage prestige.

Both have played nine matches and won three each, thus having the same six points with less than half a dozen matches in hand to rise in the table.

Though they are facing a lowly Delhi on home turf, the task will not be any easy for Kumar Sangakkara's men as they go into the match after suffering a 20-run loss against table-toppers Kolkata Knight Riders in Hyderabad on Tuesday.

Chargers would be hoping to break the sequence of defeats at home and revive their campaign tomorrow with skipper Sangakkara issuing a warning to the team's international players to shoulder the responsibility and come good in the remaining matches.

In the slam-bang format that is Twenty20, a solid batting line-up is a must for any team and Deccan have been struggling on that front.

The likes of Shikhar Dhawan, Sunny Sohal, Bharat Chipli and Sangakkara himself have not done enough to intimidate rival bowlers. The quartet will have to rediscover its form for Deccan to have any chance of featuring in the play-offs.

On the bowling front, the hosts would look up to Ishant Sharma, who has shown glimpses of good form after being off-colour for most part of the event, and Dale Steyn in the pace department.

Pragyan Ojha and Amit Mishra will be spearheading the spin attack.

Deccan have been able to win only a couple of matches on their home ground and have largely failed in putting up a collective effort.

On the other hand, Virender Sehwag-led Delhi are also coming into the game after losing their last tie against new entrants Kochi Tuskers Kerala at home.

Kochi thrashed the Delhi side by 38 runs to leave them languishing at the eighth position in the points table with their chances of advancing further in the tournament looking wafer-thin.

The poor form of the middle-order batsmen is a worry for the hosts as whenever Sehwag or David Warner have failed to fire at the top, they have struggled to put enough runs on the board.

Venugopal Rao has lost track after some good starts and Naman Ojha is yet to find his feet in the new season.

Delhi's bowlers have been impressive in parts but the South African recruit Morne Morkel still needs to lead from the front in the company of Irfan Pathan and Ajit Agarkar.

Foreign recruit Travis Birt, who has played just three matches so far, has shown that he has the potential and the team would expect him to make some significant contribution on Thursday.

Delhi's fortunes would largely depend on how Sehwag and Warner play against the Deccan pace duo of Steyn and Ishant.

Skipper Sehwag is still optimistic about his side's chances of making it to the play-offs but for that to happen the Delhi outfit will have to play out of their skin in their remaining five matches.

"It's difficult but not impossible (qualifying for the play-offs). In one of the previous IPL, Deccan (Chargers) won five in a row and qualified so there is no reason why can't we do a similar thing. But we will have to play really well to give us any chance," said Sehwag. 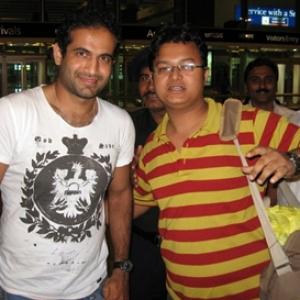