Murali Vijay won the man-of-the-match honours for the second match on the trot. 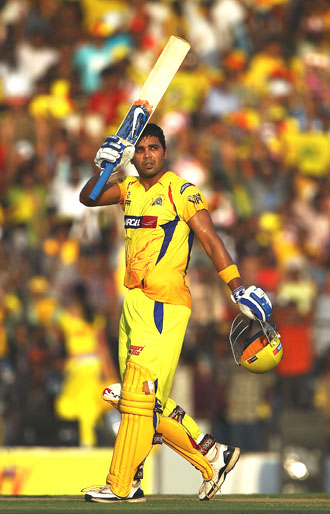 His impressive 56-ball 127 comprised 11 sixes and eight fours and coming off just 46 balls it was the fourth fastest hundred in the IPL.

The innings helped Chennai Super Kings post a record 246 for five against Rajasthan Royals, a total that was good enough to secure them the win.

Vijay, who made an entertaining 78 in the previous match against Royal Challengers Bangalore, was also involved in two crucial partnerships.

His 62-run stand for the opening wicket with Matthew Hayden (34) gave a solid foundation to the Chennai innings.

And his smashing 152-run partnership for the third wicket - the second best partnership in IPL history - with Albie Morkel (62) ensured the solidity that his team required.

Vijay reached his hundred after smashing a four off Watson before the bowler dismissed him in the final over.

It was the highest ever score by an Indian in the tournament.

It was also only the third occasion that an Indian had made a hundred in the IIPL - after Manish Pandey's unbeaten 114 against Hyderabad in the second edition and Yusuf Pathan's 100 against Mumbai Indians earlier in the tournament. 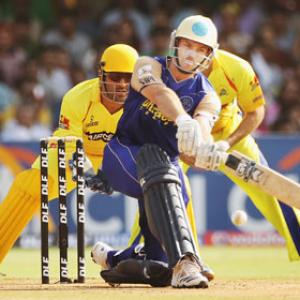