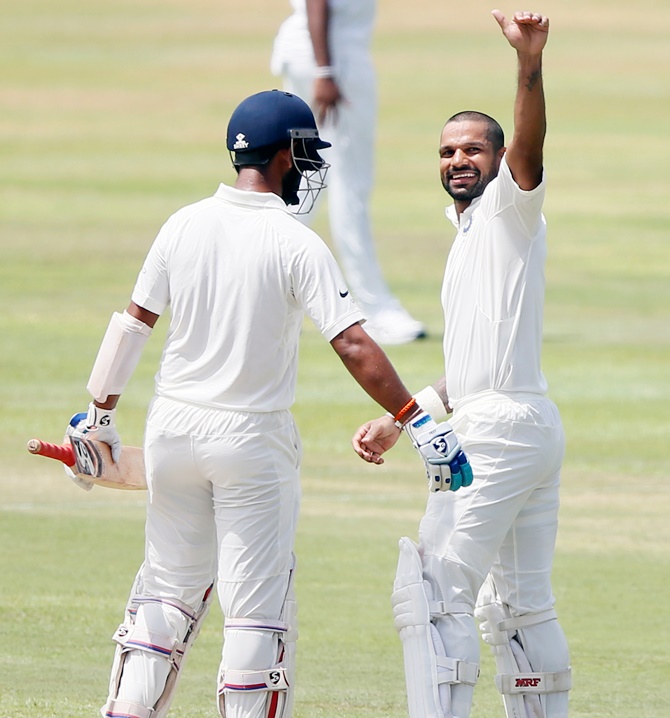 107 Number of balls taken by Shikhar Dhawan to reach his hundred.

Among the visiting openers, only Virender Sehwag has scored faster hundreds on Sri Lankan soil.

2011 The last time an Indian opening batsman scored two hundreds in an away series -- Rahul Dravid in England.

188 The opening partnership between Shikhar Dhawan and K L Rahul -- the highest by any side against Sri Lanka in Sri Lanka.

Manoj Prabhakar and Navjot Singh Sidhu scored 171 runs at the Colombo SSC in 1993.

7 Number of consecutive innings in which Rahul has scored a fifty.

0 Number of instances for a side scoring 300 or more runs on the opening day of all Tests of a three match series before India.

He lost his wicket to a left-arm spinner only twice till 2016.

In 2017 he has been dismissed five times by left-arm spinners and averages only 33 against them.

29 Number of Tests Kohli has captained India in without ever playing the same team in two consecutive matches.

This is a new Indian record. Sourav Ganguly had 28 matches on the trot without fielding the same team in consecutive matches.

Among captains who always had at least one change to their side through their whole captaincy career, only England's Ray Illingworth (31) and Bangladesh's Mushfiqur Rahim (30) are ahead of Virat.

2004 The last time two specialist 'Chinaman' bowlers played in a Test before Lakshan Sandakan and Kuldeep Yadav in this match.

Paul Adams and Dave Mohammed appeared in the Cape Town Test between South Africa and the West Indies./p>