IMAGE: James Anderson has been sidelined from the 2nd Ashes Test with a calf injury. Photograph: ICC Media

England paceman James Anderson has been ruled out of the second Ashes Test with a calf injury.

The ECB said Anderson underwent an MRI scan this week and that it confirmed a calf issue.

"As a result of the injury, he will commence a rehabilitation programme working with the England and Lancashire medical teams," it added.

The ECB said Anderson's chances of playing in the rest of the series would be reassessed on "an ongoing basis".

Anderson had been struggling to be fit for the Ashes series opener at Edgbaston after tearing his calf while playing for his county, Lancashire, last month.

The 37-year-old seamer caused plenty of problems early on without taking a wicket before experiencing tightness in his right calf during his fourth over of the match.

Anderson did not return to the field after being sent for a scan during the lunch break.

England's gamble to include Anderson in the 1st Ashes Test soon after he had torn his right calf muscle, forcing him to miss the one-off Ireland Test, backfired spectacularly.

Although he caused the visitors all sorts of problems when he opened the bowling on Thursday, Anderson only managed to bowl four overs before re-injuring the same calf -- thus leaving the team a bowler down for the rest of the match.

© Copyright 2020 Reuters Limited. All rights reserved. Republication or redistribution of Reuters content, including by framing or similar means, is expressly prohibited without the prior written consent of Reuters. Reuters shall not be liable for any errors or delays in the content, or for any actions taken in reliance thereon.
Related News: James Anderson, ECB, ICC Media, Lancashire, England
SHARE THIS STORYCOMMENT
Print this article 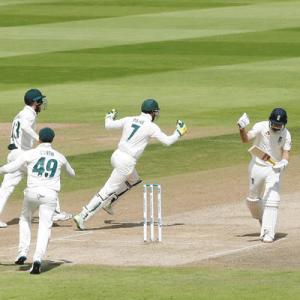 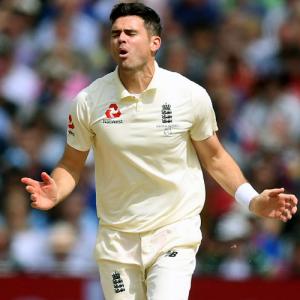