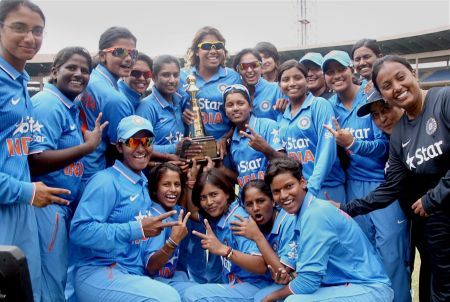 India's women cricketers produced a clinical performance to beat New Zealand by nine wickets in the fifth and final One-Day International in Bengaluru and win the series by a 3-2 margin on Wednesday.

The resounding victory prompted the Board of Control for Cricket in India to announce a cash award of Rs 21 lakh for the team, which fought back valiantly from 1-2 down in the series to emerge triumphant.

The deciding ODI was a tame affair as New Zealand were shot out for 118 in 41 overs, seven of their batsmen failing to get into double digits.

Suzie Bates top-scored with 42 while left-arm spinner Rajeswari Gayekwad had figures of 2 for 15.

Jhulan Goswami, with 2 for 17, was economical as ever and Deepti Sharma took 2 for 22.

Deepti showed her all-round prowess, scoring an unbeaten 44. Her 78-ball knock was studded with eight boundaries.

BCCI president Jagmohan Dalmiya said: "Congratulations to our skipper Mithali Raj on leading the team with distinction and registering a series win against New Zealand.

"Team has shown remarkable character to come back from 1-2 to win the series. BCCI would like to announce a reward of Rs 21 lakh for the team."

"On behalf of BCCI, I would like to congratulate the team on the series win. It was a dominant performance today and they deserve all the accolades,” said Thakur.

"This five-match ODI series proved to be competitive and was a wonderful showcase for the skill and class of women's cricket. It augurs well for the future. I would also wish to congratulate Mithali for reaching yet another milestone in her illustrious career of crossing 5000 runs. Well done once again for a stellar performance," he added.

Image: India's players celebrate with the trophy after beating the touring New Zealanders in the final ODI and winning the series.