'It's obviously tough for them to come here and play where there is obviously a bit more bounce and pace.' 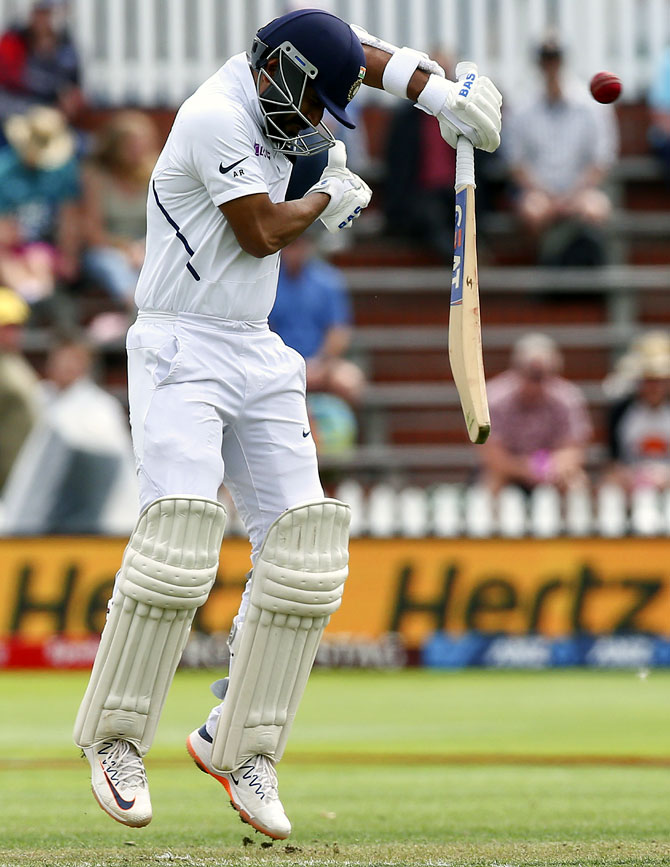 IMAGE: Ajinkya Rahane ducks under a bouncer during the first Test against New Zealand in Wellington. Photograph: Hagen Hopkins/Getty Images

The Indian batsmen will get a liberal dose of "chin music" in the second Test at the seamer-friendly Hagley Oval, senior New Zealand pacer Neil Wagner declared on Wednesday, harping on the visitors' struggles when faced with pace and bounce.

Wagner pulled out of the first Test to be with his wife for the birth of their first child, daughter Olivia. With India troubled by short balls bowled from round the wicket, the 33-year-old Wagner promised that they will employ the same strategy during the second match starting Saturday.

"It's obviously tough for them to come here and play where there is obviously a bit more bounce and pace," said Wagner.

"Obviously, playing in India where there is not that much bounce and pace around and so it is something new for them to adapt to," he added.

Wagner, just like his coach Gary Stead, believes that Indians will be better but he expects the home side to be relentless in its endeavour to compound the agony for the visitors.

"Hopefully, we can keep the squeeze on and bowl the way the boys bowled in Wellington and if we can keep piling the pressure on, we will make the job a lot easier for ourselves," he said.

The series is a short one and that's why it's taking time for the Indians to get used to the Test match conditions.

"...sometimes when you tour overseas, it takes a match or two to get used to the conditions and adapt from there. No doubt they will be better and they will come back stronger.

"Definitely we look forward to do what we do best in our conditions and keep fighting the way we did."

He was all praise for the towering Kyle Jamieson, who had a dream Test debut in Wellington. Wagner also justified is break.

"If she was going to be born early, hopefully on Monday and I would have definitely been there with the team but so be it. She wanted to try and stay a little bit longer and yeah, give her dad a little bit of a hard time," the happy father was seen grinning from ear to ear.

"It's one of those things but I wouldn't change it for anything else in the world."