'We know they are an excellent team, especially in our own conditions, and we respect that.' 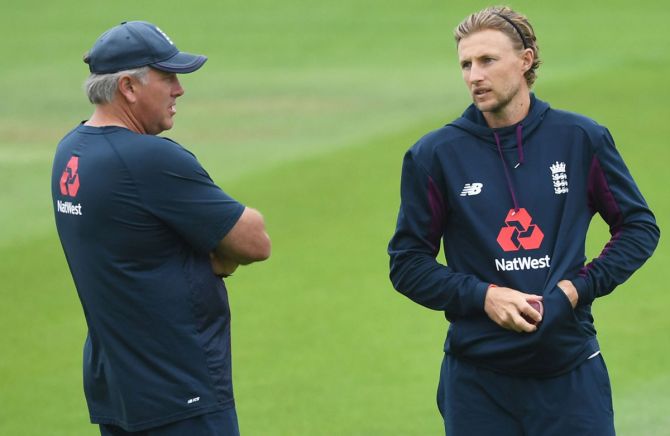 The series win in Australia shows India will be a difficult team to beat and England will have to be at the top of their game to outwit the hosts in the upcoming four-match Test series, coach Chris Silverwood said on Tuesday.

An injury-hit India had notched up an incredible come-from-behind 2-1 win over Australia after losing the opening Test at Adelaide, where they were bowled out for a record low score of 36.

"The one thing Australia has shown is India will be a difficult team to beat. It's a great challenge for us," Silverwood said during a virtual press conference.

England will play four Tests against India beginning in Chennai on February 5, followed by five T20Is and three ODIs.

"If we come out on top of this one, confidence again will go through the roof for us. I respect the fact they are a fine side with some really good players. We are going to have to be at the top of our game."

England are coming to India after a 2-0 Test series win in Sri Lanka. The visitors will look to register their first series triumph in India since they claimed a 2-1 win in 2012.

"We are going there with our eyes open. We know it's going to be a tough challenge. We know they are an excellent team, especially in our own conditions, and we respect that," Silverwood said.

"But I think it's an exciting challenge. We are in a good place. We are constantly growing. But we completely respect how big a challenge it is."

Silverwood also stood by the decision to rotate players for the India series after few former cricketers, including Michael Vaughan and Kevin Pietersen, criticised the move.

"I stand by it. We have got to look after our people. We are spending a lot of time looked in hotel rooms inside bio-secure bubbles and it's not easy.

"It's good that we are being proactive and looking after people. I am perfectly happy with the system we are using at the moment."

Jonny Bairstow, Sam Curran and Mark Wood were rested by the national selectors for the first two Tests, while Jos Buttler will play the first match before heading home, missing the last three Tests.

"... We have decided to rest and rotate, we've decided we need to look after the players. And I do believe we have to be proactive in looking after them, rather than wait until there's a problem."

Talking about Bairstow, the coach said: "He will come back into the group then the rest is down to selection. We don't make any guarantees to anybody - I don't think you can, you don't know where you will be at any given time.

"I do think it's right he has a rest. Jonny is very busy, a multi-format player and we've got to look after him, give him a bit of time at home to chill out.

"He did well - Jonny asked me the same question and I said he had done very well. (He) went in during some difficult periods of the game and applied himself well on what were testing wickets. I was pleased with him."