Spinners R Ashwin and Pragyan Ojha took full advantage of a spinning track to rip through New Zealand's top order and put India in the driver's seat by the end of the second day in the opening Test in Hyderabad on Friday.

In conditions best-suited for spinners, Ashwin and Ojha got into the act straightaway and reduced New Zealand to a precarious 106 for five in reply to India's first innings total of 438, largely built around Cheteshwar Puajara's 159.

The Kiwis still need 133 runs to avoid the follow-on with five wickets in hand, and seem heading for a big defeat with three days left in the match.

After Ojha provided the breakthrough, dismissing an aggressive-looking Brendon McCullum, Ashwin rocked the Kiwis with two wickets in his first two overs. McCullum scored 22 off 27 balls, inclusive of three boundaries. 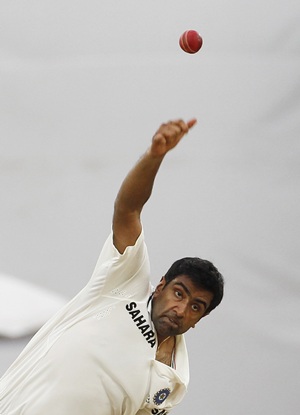 Ashwin continued his terrific spell with a third wicket in his fifth over to have the Black Caps reeling at 55 for four. His first spell figures read a superb 12-3-28-3.

Ojha finished the day with two wickets for 30 runs.

Just when New Zealand were looking to build a partnership Ojha broke a 44-run fifth-wicket partnership between Kane Williamson and James Franklin by dismissing the former. Williamson scored 32 before returning to the pavilion.

At stumps, after the second day's proceedings, New Zealand trail India by 332 runs, with James Franklin batting on 31 from 75 balls, including a four and a six, while wicketkeeper-batsman Krug van Wyk was yet to open his account having faced six balls.

Earlier, India's first innings ended on 438, with Pujara contributing 159 and adding 127 runs for the sixth wicket with skipper Mahendra Singh Dhoni, who chipped in with a useful 73.

Resuming at 307 for 5, after a 26-minute delay because of bad weather, India consolidated with a fine 127-run partnership for the sixth wicket between Pujara and Dhoni.

Ravichandran Ashwin chipped in with a 54-ball 37 (5x4) and shared a 24-run stand with the Dhoni before the skipper was out.

India were bundled out after Umesh Yadav ran himself out just ahead of the tea break.

The hosts, playing their first match after the retirement of Rahul Dravid and VVS Laxman, were in no trouble against the weak New Zealand attack as Pujara carried on from where he left on Day 1.

Unbeaten on an overnight score of 119, his maiden century in four Tests, Pujara cleverly rotated the strike.

Soon after lunch, Pujara ran out of patience as he stepped out to mistime Patel as James Franklin took an easy catch.

Dhoni and Zaheer Khan (0) departed in quick successions with India 414 for eight but Ashwin and Ojha frustrated the Kiwis with their dogged approach.

Resuming at 307 for five, India started the second day's proceedings watchfully with Kiwi pacer Trent Boult bowling a maiden over to Dhoni.

he Indian skipper took 20 balls to score his first runs of the day.

Dhoni was troubled by Kiwi pacers Chris Martin and Boult on more than one occasion but the skipper held on to the crease.