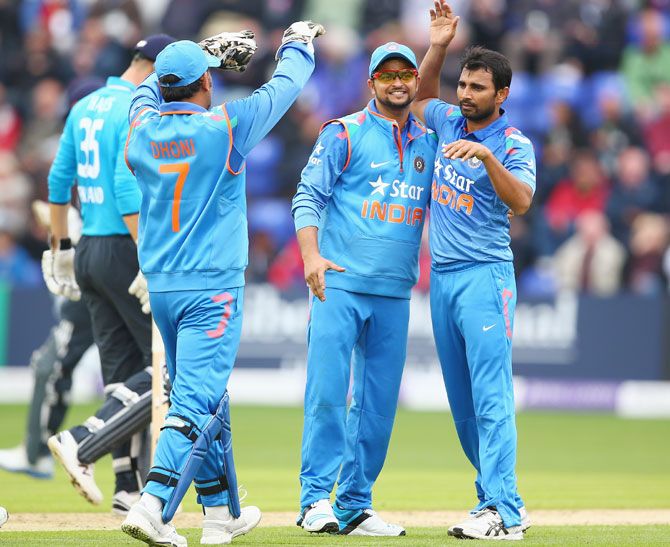 Squaring off with India once again after a fiercely fought Test series, left-arm Australian pacer Mitchell Starc predicted an intense contest against the
same opponents in their cricket tri-series match in Melbourne on Sunday.

The 24-year-old paceman was reprimanded by the ICC during the fourth Test in Sydney for his exaggerated send-off for Murali Vijay after dismissing the India opener.

It was one of several face-offs between the players of both the sides in a highly-competitive series won 2-0 by Australia, and Starc said he expects another gripping battle between the number one and two ranked ODE sides.

"It's been a pretty intense Test series. Two great teams going hard at it and it will be very much the same on Sunday. There will be two sets of guys doing their best to play their best and trying their hardest for their countries," Starc said.

"It was a fantastic Test series to watch and to be a part of and it will be no different on Sunday," he added. While Starc's Test career does not have much to talk about, his limited-overs performances for Australia have been impressive. He was the chief destroyer in the opening game of the tri-series against England, finishing with figures of 4-42 in Australia's bonus point three-wicket victory at the Sydney Cricket Ground.

Starc's four wickets on Friday took him past the 50 mark in his 29th ODI and he is averaging an impressive 21.58 with the white ball. He has taken a wicket in every 25.8 deliveries, making him the best Australian ever among those who have bagged 50 wickets.

"Of recent times I know my one-day game, I know my Twenty20 game. It comes back to that confidence thing. I showed against England why I like to be taking the new ball," he said.

"But, I want to play as often as I can for Australia and if I keep bowling fast I know I can take wickets in all forms of the game," said Starc who was publicly criticised by spin great and now television commentator Shane Warne during the India Test series for not carrying his one-day form to Test matches.