His four Test hundreds out of five career tons have come while playing against the Australians and Indian opener Murali Vijay today attributed his special liking for the Aussies to the inspiration he got from the great knocks of legendary cricketers like Sachin Tendulkar.

Vijay scored 144 runs on day one of the second Test against Australia, his fourth Test hundred (out of five) against the same opposition.

"Maybe I am playing against them too often," Vijay said jokingly at the press conference after the day's play.

"I always like to play against Australia. When I was a kid, I used to see a lot of knocks played by my seniors, Sachin Tendulkar, Rahul Dravid in Adelaide and VVS Laxman. Those are the knocks we have seen as youngsters," he said.  The 30-year-old right-handed batsman said he was happy to have done well so far in his first tour of Australia.

'Today it was really hot and it was testing us all' 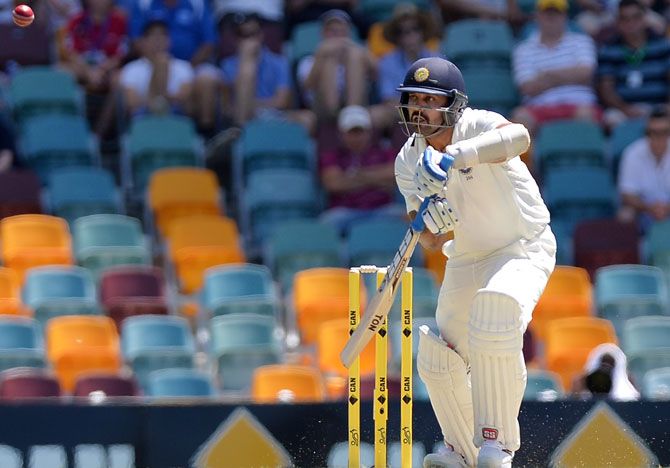 Murali Vijay of India bats during day one of the 2nd Test match against Australia at The Gabba. Photograph: Bradley Kanaris/Getty Images

This is the first time I have been playing overseas against Australia. Australia are one of the best teams and getting runs against them always helps you gain confidence in the match as well as a person. I am thankful to all the people back home who have been supporting me. It feels good that I am
batting well and getting some runs for the team," he said.

It was a tough, hot day at the Gabba as India finished at 311 for four. Australia were hit with a spate of injuries as Mitchell Marsh was ruled out to bowl again with an injured right hamstring, while Mitchell Starc and Josh Hazlewood suffered intense cramps.

"Today it was really hot and it was testing us all. I could see bowlers sulking out there and I thought a lot of people are getting tired. So I waited at the crease and made good use of it," said the centurion.

"It was more mentally challenging than mentally draining. There were a lot of suffering from the heat but when you are playing for your country, you have got to be equipped for this. I have worked hard on my fitness. You have got to do your stuff to the best of your ability," he added.

'Ajinkya told me that I got a hundred, only then I realised' 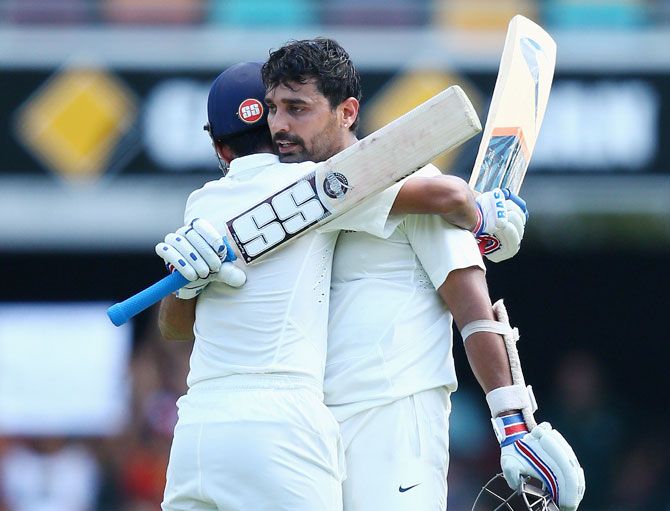 Murali Vijay of India celebrates scoring a century with team mate Ajinkya Rahane during day one of the 2nd Test match at The Gabba. Photograph: Cameron Spencer/Getty Images

Funnily enough, Vijay had to be told by Ajinkya Rahane, with whom he shared 124 runs for the fourth wicket, that he had got to his three-figure mark. Only then did he remove his helmet and celebrate the milestone, his second overseas Test hundred.

"It was great that I could build a partnership with Virat Kohli and Ajinkya Rahane. Yes I was not aware of how much I was batting on. I was just looking at the team score and batting," said Vijay.

"Ajinkya was at the non striker end and he told me that I got a hundred, only then I realised. It's good in a way that I did not want to see the score. I got out on 99 last time, and I knew the score then, and this time it made it up for it," said Vijay referring to the Adelaide Test. 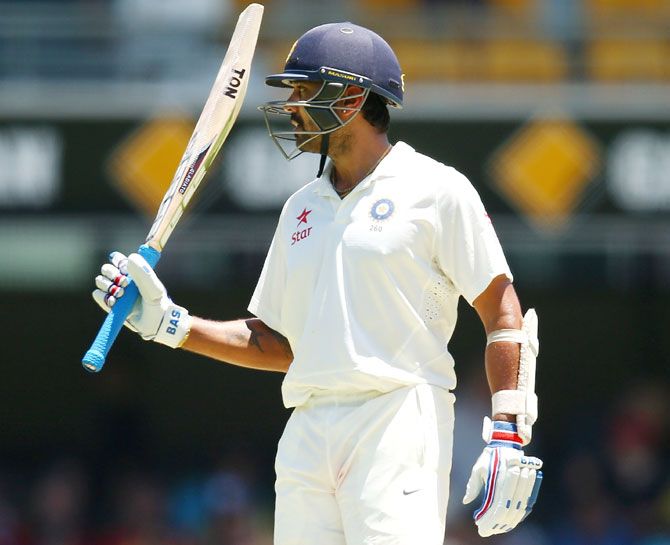 Murali Vijay of India during day one of the 2nd Test match against Australia at The Gabba. Photograph: Cameron Spencer/Getty Images

It marked a successful year for Vijay personally. He got runs everywhere, in South Africa, England and now in Australia, missing out only in New Zealand.

"You have got to have a plan to play at this level and I have my plans. I am just sticking to them and sticking as close as possible to the basics. At the moment it is helping me out," said the Tamil Nadu batsman.

"I did not have any specific plans to play in Australia and England, I just stuck to basics and things are happening for me at the moment. As an individual and as a team we can go forward from here," he said.