Set a daunting target of 364 on the final day, India spurned a chance to play safe and salvage a draw in the first Test against Australia.

Despite fine kocks by opener Murali Vijay and skipper Virat Kohli they came up short and lost by 48 runs, as their lower-order batting collapsed in the final session.

A look at the statistical highlights from the final day. 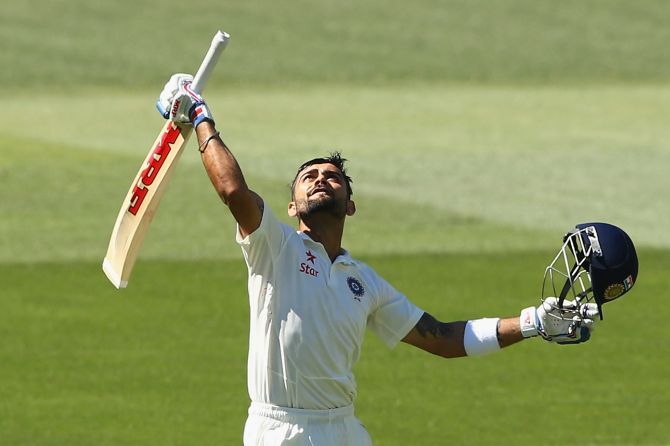 Virat Kohli celebrates after reaching his century during Day 5 of the first Test between Australia and India at the Adelaide Oval. Photograph: Robert Cianflone/Getty Images

Virat Kohli (141 off 175 balls) posted his highest score in Tests, obliterating the 119 against South Africa at Johannesburg in December 2013.

# His fourth hundred versus Australia is his eighth in Tests.

# The above innings is the highest by an Indian batsman in the fourth innings against Australia in Tests.

# His match-winning performance is the best by a spinner in a Test against India, obliterating Australia's Jason Krejza's 12 for 358 at Nagpur in 2008-09.

Australia have won five consecutive Tests against India at home 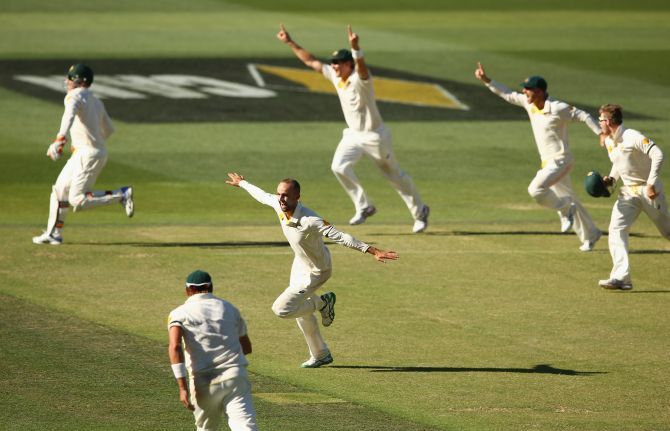 Nathan Lyon celebrates after taking the wicket of Ishant Sharma to give Australia victory during Day 5 of the first Test at the Adelaide Oval. Photograph: Robert Cianflone/Getty Images

Lyon's outstanding feat of seven for 152 is his best in a Test innings in Australia -- his second best behind the seven for 94 vs India at Feroz Shah Kotla, Delhi, in 2012-13.

# His seven instances of five wickets in an innings in Tests include four in a winning cause.

# He received his first Man of the Match in Tests.

# Australia have won five consecutive Tests against India at home -- all four in the 2011-12 series, followed by the just-concluded Adelaide Test.

# They produced their seventh victory in 11 Tests against India at Adelaide (lost one and drawn three).

# The last 12 games between the two countries were won by the home team.

Vijay dismissed in nervous nineties for the third time 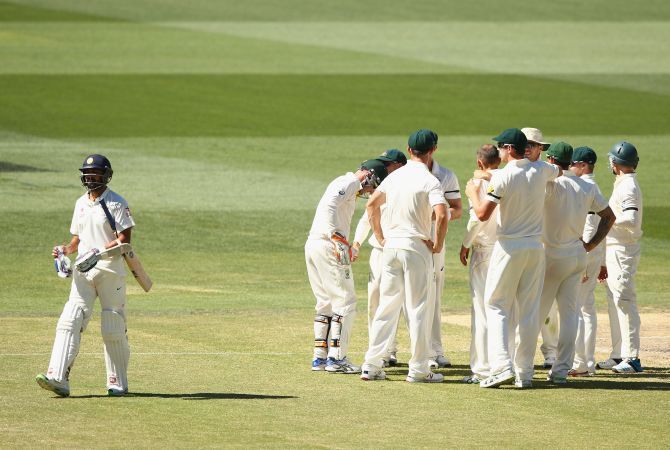 Nathan Lyon of Australia celebrates the wicket of Murali Vijay during Day 5 of the first Test. Photograph: Robert Cianflone/Getty Images

Murali Vijay registered his third fifty (99 off 234 balls) versus Australia - his eighth in Tests. It was his first fifty in the fourth innings of a Test.

# He was dismissed in the nervous nineties for the third time. He scored 97 vs South Africa at Durban in December 2013 and 95 vs England at Lord's in July 2014.

# Vijay (53 + 99) posted a half-century in each innings of a Test for the first time versus Australia.

# He is the second Indian to get out lbw at 99. Navjot Singh Sidhu (vs Sri Lanka at Bangalore in Jan 1994) provided the first instance.

# He is the third Indian opener to post a fifty-plus in each innings of a Test against Australia, in Australia. Abid Ali (78+81 at Sydney in January 1968) and Virender Sehwag (63+151 at Adelaide in January 2008) were the first to perform the feat. 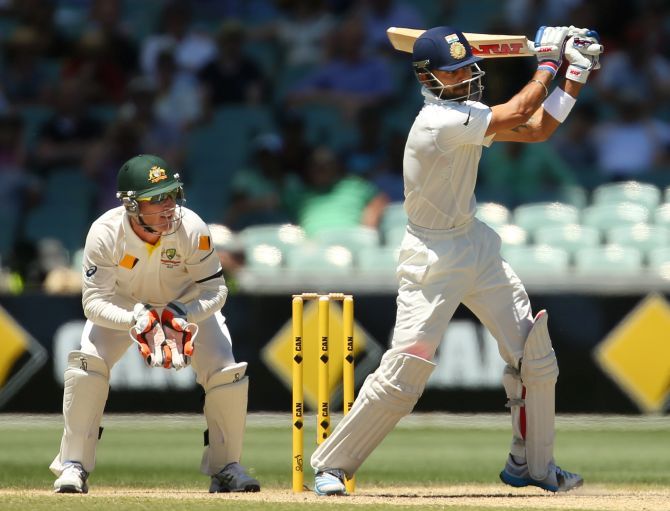 # He is the sixth overseas player to record a century in each innings of a Test in Australia. England's Herbert Sutcliffe, Wally Hammond & Denis Compton, India's Vijay Hazare and West Indian, Rohan Kanhai are the first five. Rohan Kanhai (117 & 115 at Adelaide in 1960-61) was the last to do so before Kohli.

# Kohli's match total of 256 is the highest by a player on captaincy debut. New Zealand's Graham Dowling had scored 239 & 5 against India at Christchurch in February 1968.

# He is the first skipper in Test cricket to figure in a losing cause despite posting a hundred in each innings of a Test.

# His is the second skipper after Greg Chappell to post a ton in each innings of a Test on captaincy debut. He, however, is the first to record the feat in an overseas Test.

# He is the third Indian batsman (after Vijay Hazare and Sunil Gavaskar) and the 10th in Test cricket to finish in a losing cause despite recording a hundred in each innings of a Test.

Vijay and Kohli shared a stand of 185 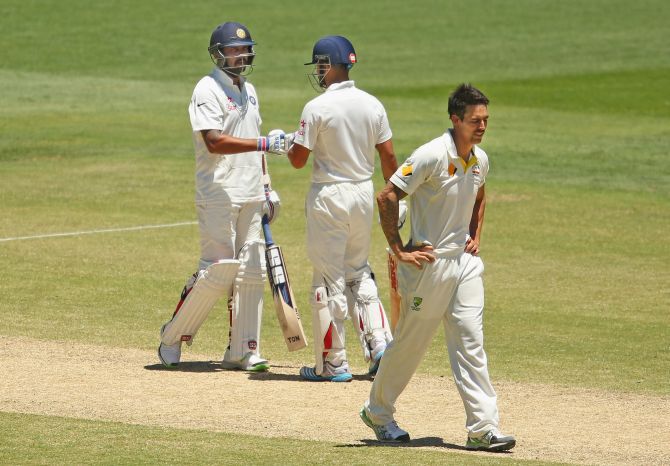 # Lyon has claimed Cheteshwar Pujara's wicket four times in Tests -- the most occasions a bowler has dismissed him.

# Vijay and Kohli shared a stand of 185 -- India's highest third-wicket partnership versus Australia in Australia, surpassing the 139 between Rahul Dravid and Sachin Tendulkar at Perth in January 2008.

# Vijay hit four sixes in the just-concluded Adelaide Test -- the second highest by an Indian opener in a Test in Australia. Sehwag had five in the 2003-04 Melbourne Test.