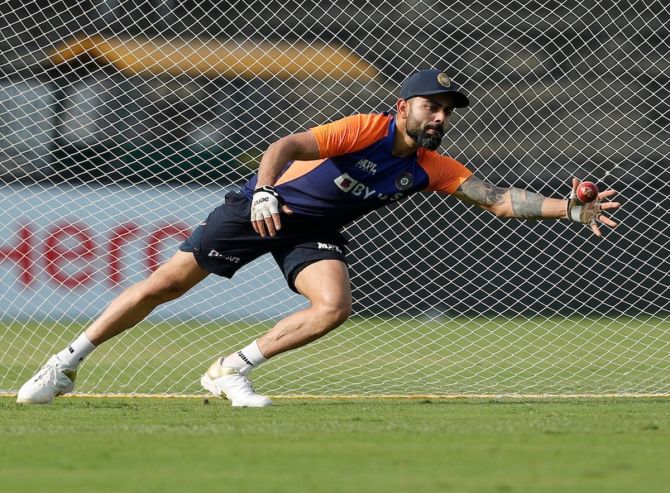 IMAGE: Virat Kohli loves to bring his 'A' game to the fore when the chips are down. Photograph: BCCI

A desperate India have decided to go for the jugular by opting for a spicy turner against a well-prepared England side in the second Test starting Saturday, well aware that it can boomerang and cost them a spot in the World Test Championship final.

The honeymoon of the Australian series is over after a sobering 227 run defeat in the first Test which must have shaken a complacent team out of its stupor ahead of three high stake Test matches.

But it is an perfect stage for India's mercurial skipper Virat Kohli, who loves to bring his 'A' game to the fore when the chips are down.

With crowd back inside the heated cauldron ready to egg him on, something he thrives on, the Indian captain would be eyeing a good slugfest against a very resolute opposition. India need to win two matches and not lose any of the games to make the WTC final.

England will have a new wicketkeeper in Ben Foakes and Stuart Broad will replace James Anderson as part of workload management. Also in the mix is Moeen Ali, a known nemesis of India, in place of last match's first innings top wicket-taker Dom Bess.

Jofra Archer's elbow injury might make way for bowling all-rounder Chris Woakes, who is a handy batsman apart from being a fine pacer in his own right.

"Jofra is a slight setback but hopefully he is fit and ready for the third Test," skipper and the team's No. 1 batsman Joe Root said on the eve of the game.

A look at the newly-laid dark-coloured Chepauk track is an indication that unlike the strip used during the first Test, this one will offer turn earlier than expected.

Ravichandran Ashwin will need a lot of support from the other end in terms of both restrictive and attacking options.

A fit-again Axar Patel is the closest to being a like-for-like replacement for an injured Ravindra Jadeja. Patel's Test debut looks imminent as Ashwin will need someone to hold on at the other end.

However, one can't be so sure about Kuldeep Yadav, who in his short six-Test career has played some tough games.

He would fancy his chance for being a better attacking option than Washington Sundar.

The 20-year-old Washington might go on to become a fine all-rounder in the Ravi Shastri mould in the coming years but as of now, he is not good enough to play as a specialist third spinner. 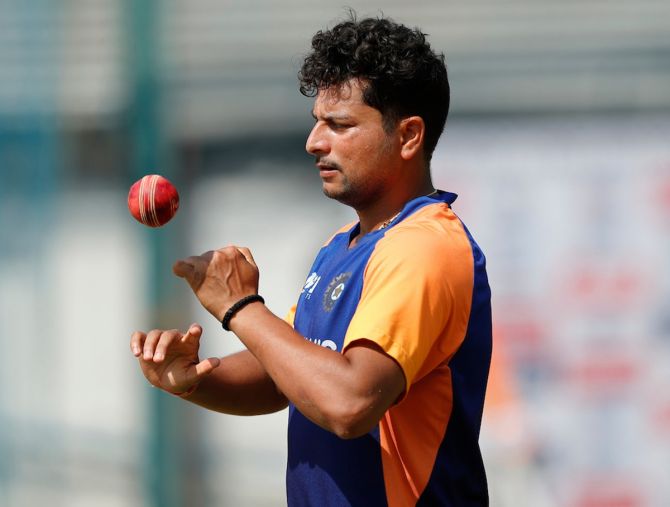 Kuldeep is an excellent attacking option but the team management's continued reluctance to play him is an indication of lack of faith in the Uttar Pradesh wrist spinner's abilities of late.

However, it is learnt that looking at the track, Kuldeep is set to be inducted into playing XI for this particular game.

The Indian team management, after a drab first two days at the Chepauk during the opening game, had two options going into the second Test.

The first option was to leave a liberal sprinkling of grass and then get tested by Broad, who would have got the SG Test to land on seam and move around off the pitch.

The second option, which they have taken, is shaving off the grass and very little watering of the pitch, leaving it to bake in the sun.

The ball will bounce and turn and the strip will break much earlier but then India have had instances where this kind of track has back-fired.

Rewind to Pune 2017, when Steve Smith punished them on a rank turner on the first day. The home team didn't have a clue that the ball will turn so much.

Or perhaps the best innings ever played in India -- Kevin Pietersen's epic 186 in Mumbai in 2012. India played a single pacer in Zaheer Khan with Ashwin and Pragyan Ojha opening the bowling.

In both games, it was the rival spinners (Graeme Swann and Monty Panesar in 2012 and Steve O'Keefe in 2017) who made the most of the conditions and rattled the Indian batsmen in their own den.

The toss will be very crucial and even if turns square, Kohli will look to bat first and expect Rohit Sharma to go beyond the two or three pretty shots that he has been managing so far.

He would have to give the team a big hundred which it desperately needs from him.

Kohli gave a master-class on how to play the reverse swing in the first Test but it always takes two to tango.

Whether it's a Cheteshwar Pujara or an Ajinkya Rahane or a Rishabh Pant, the Indian skipper will need some support to keep his team's chances alive of booking a flight to London.