Shane Watson's unbeaten hundred could not prevent Australia falling to a seven-wicket defeat to India in the third and final Twenty20 match on Sunday as Suresh Raina hit a four on the last ball to complete a 3-0 clean sweep in the series.

India were chasing 198 to win and needed 17 runs in the final over as Yuvraj Singh hit a four and a six off the first two balls from paceman Andrew Tye and Raina hit the final ball through point with his team needing two.

All-rounder Watson, leading Australia in the absence of the injured Aaron Finch, powered the hosts to 197-5 with an unbeaten 124 after winning the toss and opting to bat.

Australia made five changes to the side that lost the last match in Melbourne to concede an unassailable 2-0 lead in the series, handing debuts to batsman Usman Khawaja and part-time wicketkeeper Cameron Bancroft.

Watson, named player of the match, was the fulcrum around which the hosts' batting revolved and it was due to his 71-ball knock, which was studded with 10 fours and six sixes, that Australia posted a strong total. 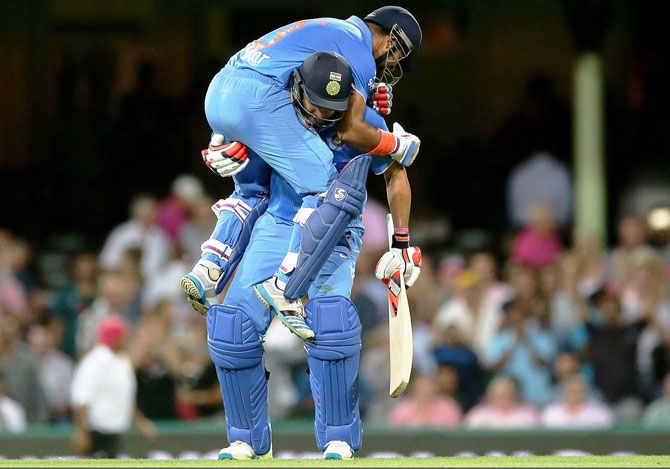 IMAGE: India's Suresh Raina and Yuvraj Singh are ecstatic after their win in the third T20 in Sydney on Sunday. Photograph: Mark Metcalfe/Getty Images

India replied with half-centuries from in-form opener Rohit Sharma (52) and Virat Kohli (50), who was named the player of the series, and then Raina's 25-ball 49 to chase down the steep target.

Rohit and Shikhar Dhawan got India off to a rollicking start, scoring 46 in just 3.2 overs, with fast bowler Shaun Tait going for 24 runs in the third over.

Rohit and Kohli then added 78 for the second wicket to keep India strongly on course, before both batsmen fell to leg spinner Cameron Boyce.

Yuvraj, who did not get an opportunity to bat in the last two matches, was sent in ahead of captain Mahendra Singh Dhoni at number five and though the left-hander struggled initially to put bat on ball, he produced the goods when his team needed.

Raina and Yuvraj added 53 for the unbroken fourth wicket.

The 3-0 sweep in Australia took India to the top of the T20 rankings in a timely boost ahead of the World Twenty20 at home from March 8-April 3.