Dhoni, who faced a barrage of questions from mediapersons about these two batting legends on the eve of the second Test against South Africa in Durban, also said that he doesn't like any comparisons to be drawn between the two.

"There is no doubt that both are brilliant batsmen, but Sachin has been around for two decades, the best in the world and had moreover throughout his career could adapt even with the demands of one-day cricket and more recently the Twenty20 version," the skipper was quoted as saying by the South African daily The Beeld on Friday.

- Greatest batsman ever: Bradman or Tendulkar?

"I do not like comparisons between Sachin and Don because they played in different eras," said Dhoni. 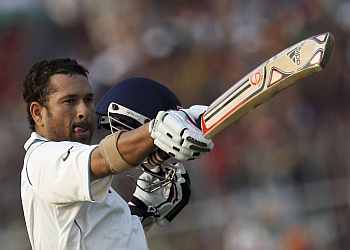 Tendulkar is the leading run maker in the history of Test cricket with 14,513 runs in 175 Tests. He recently completed 50 centuries in Tests in the first Test against South Africa at SuperSport Park in Centurion.

Dhoni said Tendulkar's presence is still an incentive for each of his team-mates.

"He's the kind of guy who get the best out of whoever he bats," said Dhoni.

"I was on the other side of the pitch when he earlier this year struck that 200 not out against South Africa in Gwalior in a one-day game," said the captain.