Statistical highlights of the fourth ODI between India and South Africa played in Port Elizabeth on Friday.

# India are without a win at the St George's Park in Port Elizabeth in five games -- one against Kenya and four against South Africa.

# Virat Kohli (87 not out) has posted his highest innings against South Africa, surpassing his 57 at Ahmedabad on February 27, 2010.

# Kohli's knock is the best against a strong opponent away from home. His aforesaid innings is his third highest overall away from home, next only to the 102 not out on January 11, 2010 and 91 on January 7, 2010 -- both against Bangladesh at Dhaka.

# Kohli's outstanding unbeaten 87 off 92 balls is the highest by an Indian at Port Elizabeth. Mohammad Azharuddin had posted 57 against South Africa on February 2, 1997.

# Kohli's run-aggregate of 191 at an average of 63.66 is the highest for India in the present bilateral series. He is also the only Indian to post two fifties in the current series.

# Rohit Sharma has recorded a below average performance in the current series -- 44 in four innings.

# Parthiv Patel (11) has registered his highest innings against South Africa, eclipsing the 6 at Dhaka on April 18, 2003.

# South Africa, with their fourth triumph in a row over India at St George's Park have registered 17 victories out of 26 games at this venue.

# Duminy has been adjudged the Man-of-the-Match for the first time against India -- his fifth in ODIs.

# Johan Botha (44) has posted his highest innings against India -- his second highest overall in ODIs, next only to the 46 against Australia at Melbourne (Docklands) on February 3, 2006.

# Robin Peterson (31) has recorded his highest innings against India -- his second best in ODIs, next only to the 36 against West Indies at Centurion on February 1, 2004.

# Botha and Duminy were associated in a partnership of 70 for the sixth wicket -- South Africa's highest against India in South Africa.

# Amla has registered 2,000 runs in 40 innings, which is a record for the quickest 2000 runs in ODIs. Pakistan's Zaheer Abbas and England's Kevin Pietersen took 45 innings to reach the said landmark.

# With first two wickets in India's innings, Lonwabo Tsotsobe took his tally to eleven in the current series at 10.81 runs apiece, equalling Craig Matthews' tally of eleven wickets in seven games at an average of 24.36 in 1992-93.

# South Africa (265 for seven) have recorded their highest total against India at St George's Park, Port Elizabeth, bettering the 243 for eight on November 29, 2006.

# Yuvraj Singh (3/34) is the first Indian bowler to capture three wickets in an innings at St George's Park, surpassing the two for 34 by Robin Singh against South Africa on February 2, 1997.

# Yuvraj's figures of three for 34 are his second best in South Africa -- the best being the 4 for six runs against Namibia in the ICC Cricket World Cup at Pietermaritzburg on February 23, 2003. 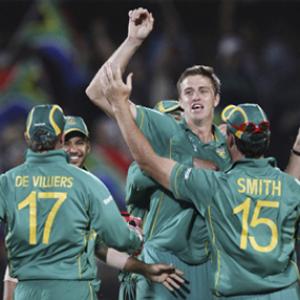 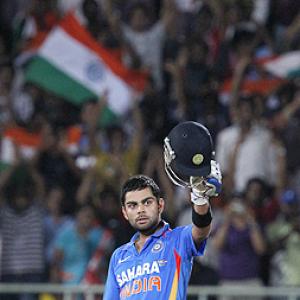 My place in Indian team not cemented yet: Kohli