Jacques Kallis and Hashim Amla hit half-centuries to put South Africa on top against India, on a rain-hit day one of the third and final Test match at Newlands in Cape Town, on Sunday.

At close, South Africa were 232 for four in 74 overs with Kallis unbeaten on 81 from 166 balls and Ashwell Prince on 28 after they were sent into bat.

It turned out to be a frustrating day for the spectators as 16 overs were lost because of bad weather with only nine overs being bowled in the morning session because of rain and badlight.

India's seamers made most of bowling first as they made early inroads, but Amla, who hit 59, led the fightback followed by Kallis's unbeaten fifty.

Sreesanth was the most successful bowler, as he claimed two for 70 in 21 overs, including the wickets of Amla (59) and AB de Villiers, who made 26. 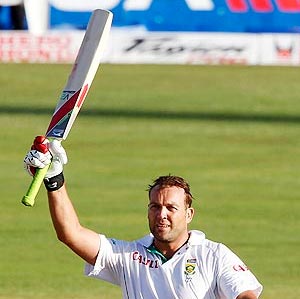 Earlier, India captain Mahendra Singh Dhoni won the toss and elected to bowl in overcast conditions and a green pitch at Newlands.

Opener Gautam Gambhir recovered from a hand injury and returned to to the Indian eleven. He replaces Murali Vijay.

Hosts South Africa, meanwhile, opted to play with the same team that was beaten in the second Test at Durban by 87 runs.

Alviro Petersen started off in style when he hit Sreesanth for two boundaries in the second over, through square leg and mid-off respectively.

The ball was moving quite a lot but South Africa's openers were able to negotiate the new ball.

Zaheer provided the first breakthrough when he once again claimed the wicket of Smith, for the sixth time in Tests. Zaheer trapped the South Africa plumb in front of the wickets with an incoming delivery for six, in the seventh over.

There was not much play in the first session as it started to rain forcing the teams off the field with South Africa on 21 for one in nine overs.

Play resumed after a two-hour gap because of rain and bad light. The conditions were perfect for the Indian pacers with overcast skies above and a greenish pitch to bowl on.

Petersen got the first boundary of the session when he flicked a full delivery from Zaheer through square leg. In the next over, Ishant gifted Amla a juicy full toss on his pads which he hit through the leg side for his first four.

Ishant then claimed the second wicket when he claimed the wicket of Petersen for 21. The opener tried to play the driver but was beaten by the outswinger which he edged behind.

Hashim Amla started nervously before he counter-attacked in fine style.

India's pacers made life difficult for Hashim Amla early on as they pitched it up and moved the ball both ways. Zaheer nearly claimed his wicket when he got Amla to inside edge an incoming delivery which just missed the stumps for a boundary through fine leg.

Amla got another edge, this time it was the outside edge off Ishant, but it flew through the vacant gully region for another four.

Sreesanth's struggle continued as he was thrashed for a couple of boundaries by Kallis in the first over of his second spell.

After a brief delay, the players walked back in to resume the second session. South Africa started off the blocks in style as Amla blasted a flurry of boundaries.

He punished Zaheer as he hit the left-armer for three boundaries in the first over after the rain break. Amla then punished the struggling Sreesanth as he hit him for two cracking boundaries through the cover region.

Despite the conditions, Amla was in no mood to relent. He took on a short delivery from Sreesanth and pulled it over square leg for a six to bring up his fifty from 69 balls.

He got lucky when his edge off Sreesanth just flew wide off Laxman at second slip, while Zaheer narrowly missed get an edge twice off Amla in the next over.

But it was Sreesanth, who won that battle with Amla. The right-hander continued in his attacking vein but this time his pull shot landed straight in the hands of the fielder on the square leg boundary to be dismissed after a brisk 59 from 80 balls.

Once again Sreesanth had delivered an important wicket at the right time, just as he had done in the previous match at Durban.

With the pacers having bowled a tireless spell, India introduced Harbhajan Singh into the attack with South Africa 116 for three in 33 overs.

But South Africa avoided any further damage in the session to reach 125 for three in 37 overs at the tea break. Kallis looked solid as he made 22 from 53 balls, while AB de Villiers was unbeaten on 14.

South Africa came out attacking in the post lunch session with Amla showing the way with a flurry of boundaries before throwing his wicket away.

South Africa progressed well in the final session, losing just one wicket as Kallis looked set for another big century.

Kallis got the first boundary of the session when he flicked a full delivery from Ishant through midwicket, in the 41st over. Harbhajan didn't pose enough threat with the ball as de Villiers stroked a wide delivery through the covers for his third four.

India did manage to keep the flow of runs under check following Amla's dismissal but South Africa were content to build their innings steadily as they reached 158 for three in 50 overs.

Against the run of play, Sreesanth struck with the wicket of de Villiers with a perfect outswinger for 26. De Villiers tried to have a go but only managed an edge that was pouched by Dhoni behind the stumps.

In the next over, Kallis brought up his fifty from 99 balls with a single on the leg side off Harbhajan, in the 52nd over.

Kallis survived a couple of anxious moments in the next over when his edge flew past the second slip for a four followed by another huge appeal for leg before wicket off Sreesanth.

Ashwell Prince also got lucky when his thick edge off Zaheer flew through the gap between the slips and gully for a boundary.

But he went on the attack against Harbhajan as he used the paddle sweep to great effect and then lofted one down the ground for two boundaries, in the 62nd over.

Surprisingly, Harbhajan kept going from the one end despite the pitch still offering a lot of assistance to the fast bowlers late in the day.

At close on day one, South Africa were 232 for four in 74 overs as they added 107 runs in 37 overs in the final session with India resorting to a defensive field most of the time.

The pacers looked a tired lot at the end of the day and the visitors looked to be going through the motions towards the closing stages.