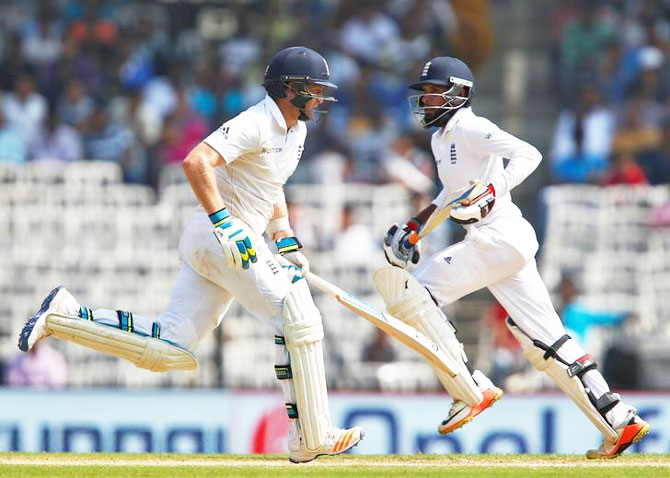 England's lower-order gave India a taste of their own medicine on a benign Chepauk track racking up a commendable 477 in their first innings on the second day of the fifth and final cricket Test in Chennai.

In reply, the hosts made a solid start blending caution with aggression to reach 60 for no loss in 20 overs after K L Rahul, undefeated on 30 in company of Parthiv Patel (29 batting), came in to open for the injured Murali Vijay.

England took inspiration from the Indian lower-middle order and the tail which has wagged throughout the home season so far, and the last three wickets put on 156 runs with the visitors once again reaching close to 500-run mark.

The highlight of the second day was a 108-run stand for the eighth wicket between debutant Liam Dawson (60) and Adil Rashid (66) after England lost three wickets in the opening session to be reduced to 321 for 7, starting the day on 288 for 4.

Jos Buttler (5) was dismissed by Ishant Sharma (2/42) and England were in danger of getting all out for 350.

But Dawson and Rashid were up for the challenge and the lack of bite in the pitch also helped their cause as they carried out a repair job. The 108 runs were added in 41.3 overs.

Dawson's maiden half-century came off 148 balls with five fours and a six while Rashid's was an even more patient effort with 8 fours in 155 balls.

While Ashwin had one of the worst figures in the ongoing series, the effort wasn't lacking but with no apparent help from the track, it was not difficult to play a defensive game that the numbers 8 and 9 played.

Both have a reputation of being useful batsmen in county cricket.

With England's lower-order frustrating the Indians, the home team got around 20 overs for the day and both the openers did not try anything extravagant during the last hour of play.

Rahul, who has paid the price for his aggressive strokeplay, which has not exactly yielded great returns in the past few Test matches was more alert with his strokeplay.

He faced 68 balls and hit only three boundaries. Rahul also showed better application against the new ball bowlers Stuart Broad (6 runs in 5 overs) and Jake Ball (0/9 in 3 overs) as he was ready to wait for the loose deliveries.

He got a couple of boundaries off Ben Stokes's bowling -- a cover drive and one through the point boundary. He also came down the track to hit Rashid through the cover region.

Parthiv, who had a good comeback match in Mohali also curbed his natural aggression hitting on only two boundaries in 52 balls.

Earlier, when England batted, Rashid was the senior partner and played a pivotal role in the partnership by sticking around, Dawson, on debut, showed some excellent batting skills and temperament considering that England were 0-3 down in the five-match series.

Rashid got to his 50 with a superb cover drive off Ravindra Jadeja and brought up the 100-run partnership with another boundary, behind point, in the same over.

Having overcome the initial jitters after pacer Ishant Sharma tested him with a flurry of short-pitched deliveries, Dawson got into the groove by playing some delectable shots en-route to reaching his maiden half century with a single to long-on.

However, before Dawson's moment of joy arrived, Umesh Yadav cut short the partnership when he had Rashid, attempting to cut a shortish ball through point, edged one to wicket-keeper Parthiv Patel.

The pitch is slow and though it has turn, it gives the batsmen enough time to adjust and play their shots accordingly. The turn will be there, but it is likely to get slower over the next three days.

The pacers also did not try the yorkers enough, perhaps, owing to lack of movement in the air.

Resuming their innings at 284 for four, England were dealt the first blow early in the morning when overnight batsman Ben Stokes (6) was dismissed by Ravichandran Ashwin with the fifth ball of the session.

Ashwin drew Stokes forward with a slower delivery and the batsman ended up getting a faint edge that was caught by wicket-keeper Parthiv Patel as England slipped to 287 for five.

With Ishant and Ashwin bowling in tandem, runs dried up as new man Jos Butler and Moeen tried to resurrect the innings.

Moeen, in fact, found the going tough against Ishant, who looked to trouble the batsman with his short-pitched deliveries and had a faint chance when the left-hander tried to play a hook shot and the mishit landed just short of Amit Mishra.

Moeen brought up the team's 300 with a single in the 96th over, but Sharma dismissed Butler in the very next delivery by trapping him in front of wicket as England slumped to 300 for six.

In the next over, Moeen danced down the track and blasted a six off Ashwin, before picking up a boundary through the midwicket area in the last ball to ease the pressure.

However, Moeen could not stay longer as he fell to a bouncer from Umesh Yadav in the 104th over. After fending at a couple of balls, Moeen tried to play a pull shot and ended up top-edging it for a running Jadeja to complete a catch.

England are playing for pride after suffering three successive crushing defeats at the hands of India in the ongoing five-Test series. 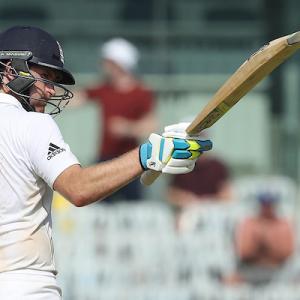 PHOTOS: India off to good start after England pile up 477 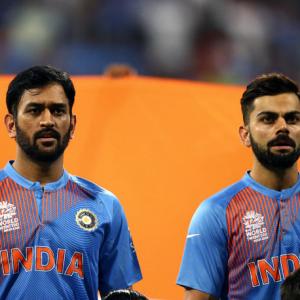