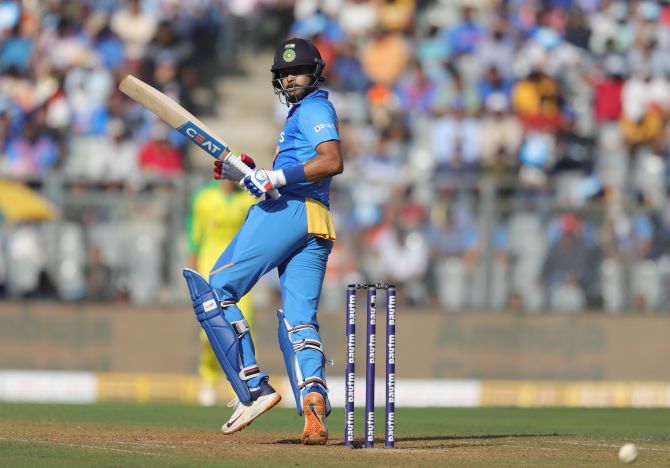 IMAGE: Shreyas Iyer flopped in the 1st ODI against Australia, batting down at No 5, scoring just 4 off 9 balls. Photograph: BCCI

Former England skipper Michael Vaughan on Friday let it rip at the Indian cricket team and said the side lacks engine room and their vulnerability in the middle order is there for everyone to see.

He also pointed out how India has not been able to progress further than the semi-final stages in the last two 50-over World Cups.

Australia had given India ten-wicket hiding in the first ODI of the three-match series at Wankhede Cricket Stadium.

"Interested to see how #India responds in the 2nd ODI. If they are honest they will accept the last 2 World Cups they have underachieved !! They lack power for me in the engine room, the middle order, they have 3 yrs to make sure they can keep up the tradition of the hosts winning," Vaughan tweeted.

In the first ODI, Australia chased down 256 runs without losing a single wicket, and with 74 balls to spare.

Shreyas Iyer looked to have cemented the number four slot, but Kohli's decision to bat at that position in the first ODI backfired.

India last won an ICC trophy in 2013 when MS Dhoni led the side to a triumphant Champions Trophy campaign.

Since 2013, India has played in five ICC tournaments and made it to two finals and three semi-finals.

The Men in Blue will take on Australia in the second ODI on Friday.