News
Business
Movies
Sports
Cricket
Get Ahead
Money Tips
Shopping
Sign in  |  Create a Rediffmail account
Rediff.com  » Cricket » 'India has agreed to play Pakistan in the UAE this December'

'India has agreed to play Pakistan in the UAE this December' 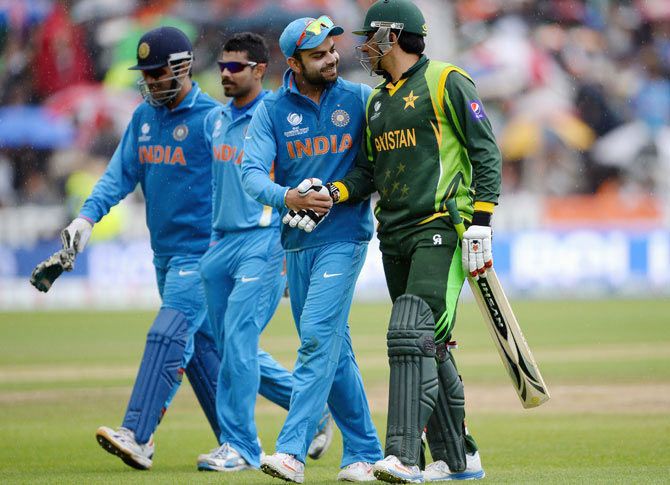 The Pakistan Cricket Board has dismissed reports that it was ready to revive bilateral series against India on Indian soil and made it clear that the first
series when it happens will be played in UAE as per the Memorandum of Understanding (MoU) signed with BCCI.

The PCB issued a statement on Sunday in response to reports in the Indian media that PCB Chairman Shaharyar Khan had said that Pakistan would like to play in India and make India its neutral home for its series.

"There is speculation in the Indian press suggesting that PCB is agreeable to touring India in December in lieu of the home series in UAE. PCB would like to clarify that PCB remains committed to the MOU signed with BCCI in which India has agreed to play the first Pak- India series in UAE this December," the statement said.

"The MoU specifically states that this series would be played in UAE or a mutually agreed venue. No alternative venue has been proposed by BCCI nor has this issue been raised with PCB chairman Shaharyar Khan or by BCCI president Jagmohan Dalimiya and secretary Anurag Thakur during his recent discussions in India," the statement further added.

PCB hopes that the issue that BCCI has with Essel Group backed Ten Sports will also be resolved shortly so that the tour can proceed in December in UAE.
Under the MoU signed last year after the formation of the Big three governance system in the ICC the Pakistan and Indian cricket boards agreed to play six series against each other from 2015 to 2022 with the first which will mark revival of bilateral ties in the UAE in December.

Source: PTI© Copyright 2020 PTI. All rights reserved. Republication or redistribution of PTI content, including by framing or similar means, is expressly prohibited without the prior written consent.
Related News: UAE, Pakistan Cricket Board, BCCI, India, MOU
SHARE THIS STORYCOMMENT
Print this article