Bikash Mohapatra reports from Edgbaston, on the third day's play in the third Test between India and England.

It was an innings that will be remembered for a long time to come.

It wasn't about class. It was about grit, about determination and fortitude.

In the final analysis, Alastair Cook may have fallen short of a deserving triple hundred by six runs, but he ended up bolstering his fast-growing reputation.

The 26-year-old's 294 was the pivot around which England amassed 710 for 7 (declared) in their first innings of the third Test against India at Edgbaston, his 545-ball innings inclusive of 33 hits to the fence.

It was the sixth highest Test score by an England batsman -- only behind Len Hutton, Wally Hammond, Graham Gooch, Andy Sandham and John Edrich.

The home team declared the moment he was dismissed, leaving the visitors a tough last hour to negotiate. 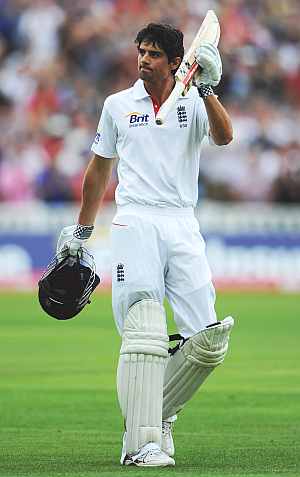 India, as they have for most of the series, stuttered.

The pressure of having to score 487 runs just to make England bat again definitely played on their batsmen's mind.

Virender Sehwag achieved a dubious record (a golden pair), when James Anderson had him caught by Andrew Strauss at first slip.

They finished on 35 for one (after 12 overs). Rahul Dravid was batting on 18 and giving him company was Gautam Gambhir, on 14.

With two days in the match left to be played, India is almost certain of another heavy defeat, one that will not only ensure England the series win but also the no.1 Test ranking.

It was that fickle English weather again!

After only three overs were bowled on the third day, the players had to head back to the pavilion because of a persistent drizzle.

It was enough time for Eoin Morgan to complete his fifty, his fourth in Tests and second of the series.

The covers came on and it was disappointing for the capacity crowd, though only for a brief while. Play resumed after 15 minutes.

A single by Cook (off Ishant) helped bring up the 100-run partnership for the fourth wicket.

For those into stats, this was England's ninth century partnership of the series. Besides, they have seven fifty-plus stands.

In contrast, there is only one century and nine 50-plus partnerships for India.

The home team's progress in the first hour was a rehash of their modus operandi a day earlier -- only 22 runs were added to the total in the first 10 overs.

Soon after, a couple off Ishant helped Cook complete a well-deserved double hundred, his second in Tests -- after his unbeaten 235 against Australia, in Brisbane last November.

It marked an amazing turnaround for a batsman who had scored just 20 runs in his last four innings. Besides, it was the 50th double hundred by an England batsman.

After 18.2 overs were bowled in the day, with England having gone past 500, there was another rain break. The downpour was heavy this time around and prompted the umpires to take an early lunch.

Dhoni made Raina bowl a lot of overs after the lunch break. On one hand, it could have been construed as the captain's frustration, as his main bowlers failed to make an impact.

On the other, it might have been the strategy of at least improving the over-rate.

Amit Mishra came in to bowl, for the first time in the day, in the 144th over, replacing Sreesanth (31-4-129-0). His fifth delivery was a no-ball, something that had affected him on the second day.

A single off Mishra, in the latter's subsequent over, helped Morgan complete his second Test century, following his 130 against Pakistan at Trent Bridge last year.

But the 24-year-old was dismissed soon after, hitting a Raina delivery straight to Sehwag at cover. Morgan's 199-ball 104 was inclusive of 11 hits to the fence. He and Cook put 222 runs for the fourth wicket.

It was the highest fourth-wicket stand for England against India at Edgbaston, beating the 191 between Geoffrey Boycott and David Gower, set way back in 1979.

Ravi Bopara's (7) first scoring shot was a boundary off Mishra, one that helped England get past the 600-run mark. The bowler shortly had his revenge though, trapping the batsman leg before.

It was an opportunity lost for Bopara, playing in his first Test in more than a year.

Soon after, a single to midwicket off Raina enabled Cook get to 250. It was the 13th time in Test cricket that an Englishman had scored 250 or more.

Matt Prior (5) did not survive long either. A spectacular catch by Tendulkar, running in from deep backward square leg, ensured an early exit for the English stumper and Mishra his third wicket of the innings.

In came Bresnan, and a couple off boundaries off his blade, one each off Mishra and Raina, helped stretch England's lead past the 400-run mark.

There was a 11-minute delay owing to bad light soon after play had resumed after the break.

When it restarted, Bresnan hit a massive six over long-on off Ishant to raise his fifty. It was his third Test fifty and his second of the series after his exploits in Nottingham.

The hit also helped England get past the 700-run mark. However, Ishant finally ended Cook's resilience in his next over, Raina running in from deep point to take a smart catch.

It was a disappointing end to a spectacular innings. England declared immediately. It was the home team's highest ever total against India, surpassing their 641 for four at Lord's in 1990.

There couldn't have been a worse start for India.

Sehwag, expected to bring a change to his team's fortunes, perished first ball for a second time in the match. The opener was guilty of edging an away swinger from Anderson and Strauss made no mistake at first slip.

Gambhir and Dravid ensured the visitors survived to fight another day of what is a lost battle.