England batsman Jonathan Trott's participation in the third Test against India at Edgbaston is doubtful after he suffered a shoulder injury in the second Test.

Trott had strained the AC joint in his left shoulder while diving to intercept a drive from Rahul Dravid during the second Test at Trent Bridge. 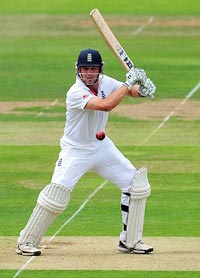 The 30-year-old needed several minutes of on-field treatment before walking off the field.

According to the Guardian, England are monitoring Trott's progress, and he will be given two work-outs in the nets between now and Friday evening, when the selectors will take a decision about whether he is fit enough to be included.

Trott, who batted scratchily down the order in the second innings, was described by coach Andy Flower as "still in a bit of discomfort and nowhere near 100 percent yet".