'India lacked discipline, did not even compete in NZ Tests'

'India only participated. Batting and the inability to dismiss NZ's lower-order let India down.' 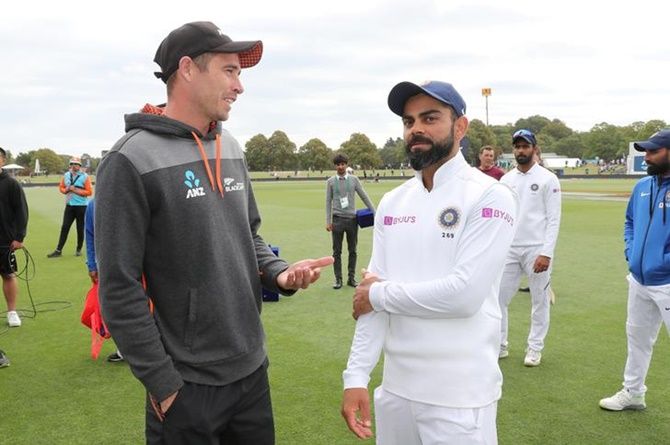 Former India cricketers, including Bishan Singh Bedi, VVS Laxman and Sanjay Manjrekar, questioned the Virat Kohli-led team's tactics after it was humbled 0-2 in the Test series in New Zealand.

India lost the second Test by seven wickets inside three days in Christchurch on Monday, after going down by 10 wickets in the opener in Wellington.

"How does one explain complete Kiwi dominance over No 1 Test team? I am struggling to press the right button. Could someone please help without being abusive or atrociously unkind to any individual?" Bedi tweeted.

Laxman felt India were not disciplined enough in the series.

"Many congratulations to the @BLACKCAPS on beating India and winning the Test series comprehensively. India couldn't show the discipline required to stick it out and will be deeply disappointed," Laxman tweeted.

Former India opener Aakash Chopra said Kohli's team did not even compete in the series, unlike the tours of England and South Africa in 2018.

"India under Kohli competed in most Tests overseas....but this series was different. India only participated. Batting and the inability to dismiss NZ's lower-order let India down," said Chopra.

Batting and the inability to dismiss the tail quickly hurt India the most. In a Q and A session on Twitter, former batsman Manjrekar had a word of advice for the national team.

"Trying too hard to get the tail out? Best to stick with normal plans that you have for top order. Tail Enders now are not so easy to dismiss with a bouncer followed by a Yorker," he said.

India played just one warm-up game before the Test series, but Manjrekar said away tours are not all about planning.

"It's not just about planning. It's about making the best with what you have. Indian conditions throw up certain kind of players with certain instincts and styles. Go to NZ you have to reinvent yourself. So it will be a constant testing of players as to who can do that."