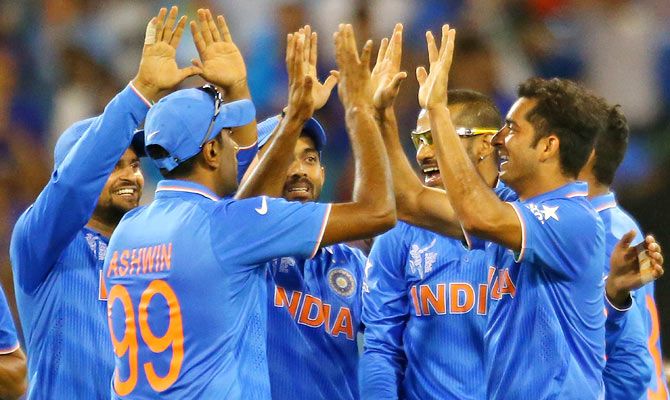 Former India pacer Rudra Pratap Singh believes the defending champions, who have won their first three matches, have found form at the right time and sent out a warning to other teams in the ICC World Cup.

After a lacklustre showing in the Test series against Australia and the ODI tri-series that followed, India look a totally different side and Singh could not agree more.

- India go from butterfingers to electric-heels in the field

"India definitely looks like the team to beat in this World Cup so far and I am sure the other teams are watchful of this young Indian side," Singh said on Sunday.

India's clinical showing continued in their third match as the bowling attack, missed the injured Mohammad Shami, proved quite a handful against an inexperienced UAE line-up and packed the minnows for 102 in 31.3 overs.

Singh was impressed with the efforts of the Indian seamers, who extracted a lot of help from the WACA track in Perth against UAE.

"I am impressed by some of the swing bowling by the Indian seamers today. It was particularly heartening to see that the bowlers were able to take help from the pitch," the left-arm Uttar Pradesh pacer, who has represented India in 14 Tests and 58 ODIs, said.

Umesh Yadav bagged two wickets from 6.3 overs and pace spearhead Bhuvneshwar Kumar got a wicket as they made most of bowling with the new ball.

Singh was impressed with the pacer bowlers, who made their presence felt in Shami's absence.

"Umesh Yadav was fantastic today, he made full use of the pitch conditions and left UAE batsmen stunned. Bhuvneshwar Kumar who was under pressure replacing the in-form Shami also delivered a great performance to his credit, especially with his outswingers," Singh, who last represented India in 2011 against England, said.

Off-spinner Ravichandran Ashwin was the pick of the Indian bowlers, bagging four wickets on a bouncy WACA pitch as left-arm spinner Ravindra Jadeja also chipped in with two scalps.

Earlier, India had got past arch-rivals Pakistan in their opening encounter at the Adelaide Oval and then inflicted an embarrassing 130-run loss against South Africa in their second ODI.

The Mahendra Singh Dhoni-led side next play West Indies in their next fixture on Friday, March 6.