IMAGE: India’s Sarfaraz Khan has scored half-centuries in both the matches at 2016 Under-19 World Cup. Photograph: ICC.

Having already assured a quarter-final berth, Indian team will be aiming to top their pool when they square off against a spirited Nepal in the final group league encounter of the ICC U-19 World Cup, on Monday.

Rahul Dravid's boys have steamrolled their earlier opponents beating Ireland by 79 runs and New Zealand by a whopping 120-run margin.

With Nepal also having qualified for the quarterfinals, tomorrow's match will decide which team will top Group D.

The group champion will face either Namibia or Bangladesh in the quarter-final after defending champions South Africa crashed out on Sunday.

On paper, an India versus Nepal cricketing contest should have been declared as a mismatch but the teenagers from the Himalayan nation have been the 'surprise package' of the tournament so far, defeating New Zealand and Ireland with minimum fuss.

The likes of Sarfaraz Khan, Avesh Khan, Rishabh Pant will need to maintain the same intensity as Nepal could well prove to be a proverbial banana skin for the three-time champions.

The country may have been ravaged by earthquake last year but that could not dampen the spirits of the immensely talented bunch of Nepalese boys, who have shown that they can punch above their weight with limited facilities.

The likes of captain Raju Rijal and leg-spinner Sandeep Lamichane, who took a hat-trick against Ireland, have trained at the Himachal Pradesh Cricket Academy in Dharamsala after their own cricket academy in Kathmandu was deemed unfit for training due to damages caused by earthquake.

For India, it has been a smooth sailing so far save a bit of worry regarding skipper Ishan Kishan's poor form. Kishan has not scored in both matches.

However the 'experienced' Sarfaraz with a couple of 74s to his credit would again like to score big before the knock-outs. The normally flashy Rishabh also curbed his natural instincts during his half-century against the Kiwis.

Spin bowling all-rounder Mahipal Lomror has also been consistent in both departments.

The bowling will be led by the 6 feet 2 inch Madhya Pradesh lad Avesh Khan, who has been posing problems with his in-cutters. 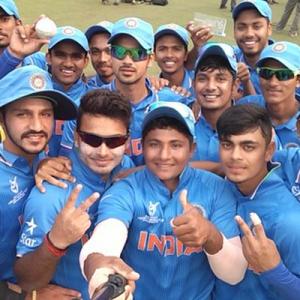 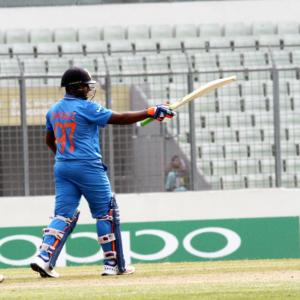