The Indian under-19 cricket team produced a fine all-round performance to outplay Australia and notch a 47-run win in its opening match of the ongoing tri-nation series at Marrara Oval in Darwin.

India's bowlers got the better of Australia, sparking a dramatic collapse late in the day. Australia appeared on track to reach India's total of 221, before losing six wickets for 19 runs to be all out for 174.

Ben McDermott was the only Aussie batsman to offer a fight with a half-century, while the remainder of Australia's line-up was stifled by India's impressive bowling. 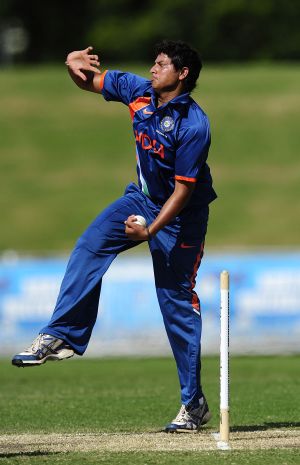 Kuldeep Yadav led the way with figures of 3/19 after opener Ankush Bains sparkled with a 100-ball 64 which included five fours and a six. Skipper Vijay Zol also displayed impressive form with a 63-ball 46, studded with six fours.

Earlier, Australia won the toss and elected to bowl on what looked to be a variable wicket.

India's openers proved up to the task, looking ominous early and untroubled by Darwin's sub-continental-like conditions.

Wickets were hard to come by for the Aussies, but their perseverance was rewarded following Matthew Kelly's dismal of top-scorer Ankush Bains in the 39th over.

For the second match in a row, Australia's bowlers built the pressure and bowled well at the death, taking seven wickets in the last 10 overs to dismiss India for 221.

India are the reigning U19 ICC Cricket World Cup champions after they beat Australia in the final last year in August in Townsville.

India will next take on New Zealand at Marrara Oval on July 4.