England shot out India for a paltry 78 and cruised to 120 for no loss in their robust reply to take early control of the third Test at Headingley on Wednesday.

Complementing the bowlers' effort, Haseeb Hamid and Rory Burns batted through rest of the opening day forging England's best opening partnership in the series so far.

Hamid celebrated his promotion to the opener's role with an unbeaten 60, while Burns was on 52 at stumps with England 42 runs ahead and on course for a big first-innings lead.

"It's been a great day for us and topped off by being none down overnight," seamer Craig Overton, who claimed 3/14, told Sky Sports.

"It's good for us bowlers to get some rest and be ready to go when we're back out there.

"We know they're a good bowling attack, we know it will still be hard tomorrow, so we need to work hard to bat them out of the game." India captain Virat Kohli won the toss but was left to rue his decision to bat as edges after edges kept flying into Jos Buttler's waiting gloves behind the stumps.

The ageless James Anderson alone forced three of them in his magical spell that read 8-5-6-3.

The in-form KL Rahul was the first to be dismissed caught behind for a duck, attempting a drive even before getting his eye in, in what would become a template for the subsequent four dismissals.

Cheteshwar Pujara fell for one, looking in two minds about which way the ball would swing. Kohli has had a rather subdued series so far with the bat and Anderson prevailed in the latest round of their personal duel to ensure it remained that way.

Anderson leapt and let out a roar to celebrate the India captain's dismissal for seven.

Ollie Robinson struck on either side of the lunch break, dismissing India vice-captain Ajinkya Rahane and the dangerous Rishabh Pant to reduce India to 58-5.

Rohit Sharma (19) faced 105 balls but threw away his wicket, attempting to pull a shoulder-high ball from outside the off-stump.

India subsequently lost four wickets in a span of six balls and eventually wilted in a little over 40 overs and inside two sessions for their third lowest total against England. 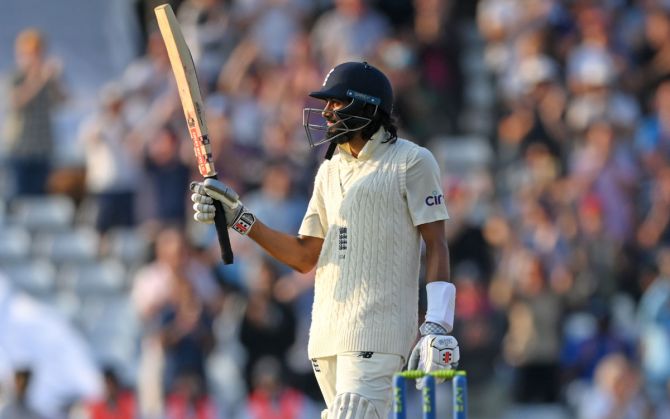 England seamers were rewarded for bowling a fuller length and both Overton and Sam Curran (2/27) were denied hat-tricks by the Indian tailenders.

India are 1-0 up in the five-Test series having won the ill-tempered second Test at Lord's where heated words were exchanged and tailenders from both sides were subjected to bouncer barrage.

The tourists fielded an unchanged squad, while England brought in Dawid Malan for Dom Sibley, while Overton replaced an injured Mark Wood.