Australia failed to make the best of a century-opening partnership and were reduced to 273 for 7 in the first innings on the second day of the third Test against India at the Punjab Cricket Association stadium in Mohali on Friday.

While Ed Cowan, David Warner and Steven Smith did well for the Aussies, who are two down in the four-match series, it was some fine spin bowling by Ravindra Jadeja that enabled the home team end the day on a high.

A look at some statistical highlights from the day’s play.

# Dhoni is the first to complete 50 dismissals as wicketkeeper for India against Australia in Tests. 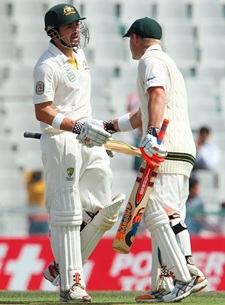 # Cowan registered his sixth fifty in Tests, third against India.

# David Warner (71) posted his highest score against India in India, eclipsing the 59 at Chennai in the first Test of the current series.

# Warner's aforesaid innings is his highest away from home. His seventh fifty in Tests is his second against India.

# Steven Smith registered his third fifty (58 not out) in Tests - his first against India.

# The 139-run stand between Cowan and Warner is Australia's highest for the first wicket against India in India, bettering the 136 between Matthew Hayden and Justin Langer at Chennai in October 2004.

# Greg Chappell and Clarke are the only two Australian captains register first-ball ducks against India.

# Phillip Hughes has scored just 27 runs in five innings, at an average of 5.40 in the current series.