As India gear up to take on Australia in the four-match Test series, starting December 9, Rajneesh Gupta presents a statistical look at the Test record between the two teams. 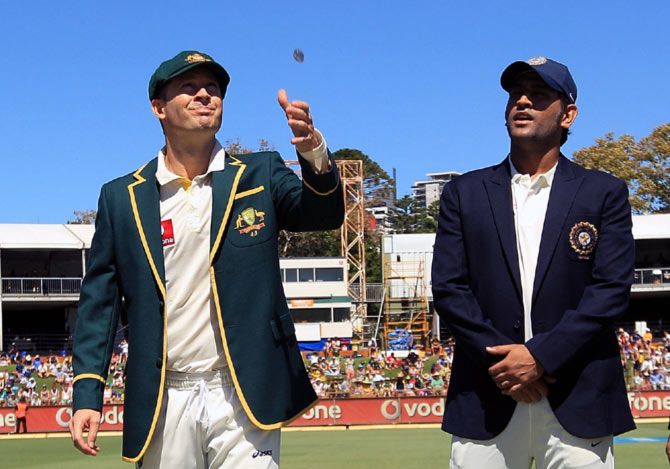 India’s rivalry with Australia dates back to 1947-48 when Lala Amarnath’s team travelled to take on the hosts, who were being captained by batting great Don Bradman.

Australia swept to a 4-0 victory in the five-match series before the two teams clashed again nearly eight years later in India, where the hosts again lost 0-2.

India’s first series victory over Australia came in 1979-80 under the captaincy of Sunil Gavaskar. It was a six-match series played in India, which the hosts won 2-0 with four matches drawn.

Since 1996-97 the two teams play for the Border-Gavaskar Trophy, which India won on the first attempt in 1996-97 in a one-off Test series.

Interestingly, the last two series finished in whitewashes. Australia blanked India 4-0 in the 2011-12 four-match series at home before they also faced the same result when they travelled to India the next year.

India are yet to win a Test series in Australia in 10 attempts, but won seven out of 13 series played at home against their opponents from Down Under. VVS Laxman hits a boundary on his way to a record 281 against Australia during the third Test at the Eden Gardens in Kolkata in March 2001. Photograph: Shaun Botterill /Allsport

In terms of individual batting, India’s best showing against Australia is the magical innings of 281 by V V S Laxman in that memorable Kolkata Test match in 2000-01 which India won despite following-on.

No Indian batsmen has scored a triple century against Australia yet, but were on the receiving end of Michael Clarke’s splendid knock of 329 not out in Sydney in 2011-12.

MOST RUNS IN A SERIES

Rahul Dravid leads the run aggregate in a series by an Indian batsman against Australia with 619 runs in four matches, in the 2003-04 series, when he made 619 runs at an average of 123.

For Australia, not surprisingly, it is the great Bradman who hammered 715 runs in five matches in the 1947-48 series with four centuries and a fifty in six innings.

MOST RUNS IN INDIA-AUSTRALIA TESTS:

Sachin Tendulkar played the most number of Tests by an Indian against Australia and tops the runs chart. His tally reads 3630 runs in 39 Tests with 11 centuries at an average of 55, followed by Laxman, who enjoyed playing against Australia, scoring 2434 runs in 29 Tests.

For the Aussies, former captain Ricky Ponting leads the way with 2555 runs in 29 Tests with eight centuries.

BEST BOWLING IN AN INNINGS

Jasubhai Patel holds the record for the best bowling figures by an Indian against Australia when he claimed nine for 69 in Kanpur in 1959-60. Harbhajan Singh, Kapil Dev and Anil Kumble have claimed eight wickets in an innings each.

For Australia, little-known Jason Krejza has the best bowling figures when he claimed eight for 215 at Nagpur in 2008-09 in his debut match. But Australia still ended up losing the game by 172 runs.

BEST BOWLING IN A MATCH 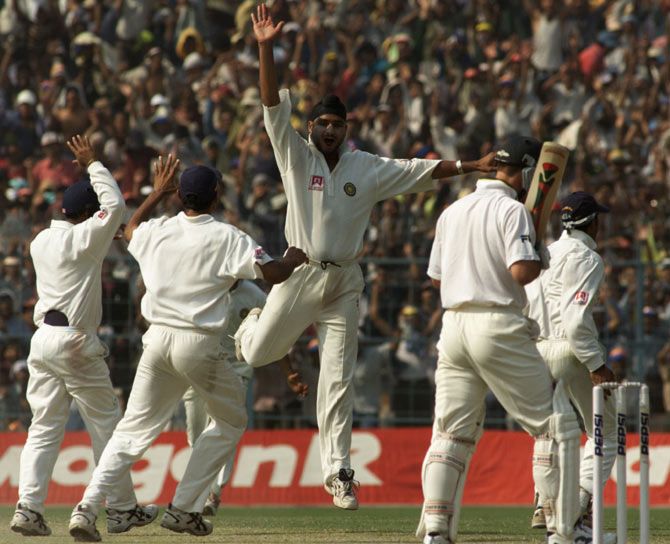 Harbhajan Singh (centre) celebrates the wicket of Ricky Ponting during the third Test match at the Eden Gardens in Kolkata in March 2001. Photograph: Hamish Blair/Allsport

Off-spinner Harbhajan Singh holds the Indian record for the best bowling performance against Australia, with figures of 15 for 217 in Chennai in 2000-01.

MOST WICKETS IN A SERIES

The best performance by an Indian bowler in a Test series against Australia again belongs to Harbhajan, who took a massive 32 wickets in the three-Test series in 2000-01 including a hat-trick. Bishen Singh is second with 31 wickets in 1997-98 while Craig McDermott also took the same number of wickets in 1991-92 series in Australia.

MOST WICKETS IN INDIA-AUSTRALIA TESTS

Anil Kumble is the top wicket-taker for India against Australia and is the only bowler to have taken 100 wickets or more with 111 scalps from 20 Tests, with Harbhajan Singh second on 95 wickets from 18 games.

For Australia, fast bowler Brett Lee tops the charts with 53 wickets in 12 Tests against India followed by Richie Benaud, who claimed 52 wickets in eight matches.

Mahendra Singh Dhoni has captained India the most number of times against Australia and holds a creditable 72 percent success rate, with eight victories in11 Tests. The Nawab of Pataudi Jr. also captained India in the same number of Tests but won only two games for a success rate of 18 percent.

Interestingly, Allan Border led Australia in 11 Tests against India, winning four but didn’t lose a single of them, while Ricky Ponting managed just two wins in the same number of games.