A listless display by India 'A' allowed New Zealand 'A' to win the third and final unofficial ODI by 65 runs and square the three-match series 1-1 in Lincoln on Sunday.

The Indians won the first match and the second ended in a tie.

For the second successive game, the India 'A' middle order faltered and they were bowled out for 163 in 42.1 overs, after the hosts rode on Daniel Flynn, Neil Broom and Derek de Boorder's half centuries to post 228 for eight in 50 overs at the at Bert Sutcliffe Oval.

There was a wicket each for Jaydev Unadkat and Ashok Menaria.

The Indian chase was steady to start to start with as Unmukt Chand and skipper Abhinav Mukund added 46 runs for the first wicket in 12.1 overs.

But barring Chand, who compiled 46 off 76 balls and, to an extent Menaria (30 off 24), Indian batsmen lacked the willingness to fight it out against the in-form New Zealand bowlers.

Even Chand and Menaria failed to make use of the starts they got.

Chand showed intent, hitting seven fours and a six, but his dismissal to Trent Boult triggered a mini collapse as the visitors lost three wickets for ten runs.

Left-arm seamer Neil Wagner was the wrecker in chief as he picked up four wickets for 36 runs. Leg spinner Tarun Nethula chipped in with three for 46, while there were two for Boult.

The New Zealanders were cautious initially against Indian seamers Unadkat and Vinay Kumar.

But once the surface eased up a bit, Flynn and Broom played their shots and put on 64 for the third wicket, before the former fell for 54.

Broom, who scored 51, was involved in another half-century stand, for the fifth wicket with Derek de Boorder, who struck 51 off 55 balls.

The two teams will now face off in the first of two four-day matches, starting on Wednesday. 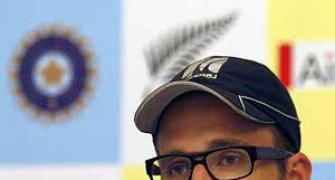 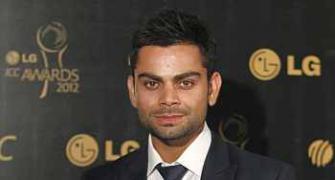