India A squandered a strong start by their openers to hand the initiative to New Zealand A as they were struggling at 136 for four at the end of the rain-affected opening day of the first unofficial Test in Lincoln, on Wednesday.

Sent in to bat, Unmukt Chand (54) and captain Abhinav Mukund (42) gave India a solid start, scoring 50 runs in just 10.5 overs while adding 82 runs for the first wicket before the latter was dismissed towards the lunch break.

One-down Anustup Majumdar lasted just five balls for his four but Chand, who captained India to Under-19 World Cup triumph recently, held on firmly to carry India to 109 for two at the lunch break. 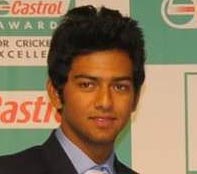 However, Chand fell soon after reaching his half-century and New Zealand struck once again in the form of Manandeep Singh's (20) wicket to reduce India to 136 for four before bad light forced play to be called off early.

Rain followed soon and no further play was possible as the first day of the four-day match saw just 36.4 overs being bowled.

At stumps, Ambati Rayudu was unbeaten on nine, while left-hander Ashok Menaria was yet to open his account.