The first day of inaugural day-night Test match also marks the first death anniversary of Phil Hughes, who had died after being hit on the cricket field 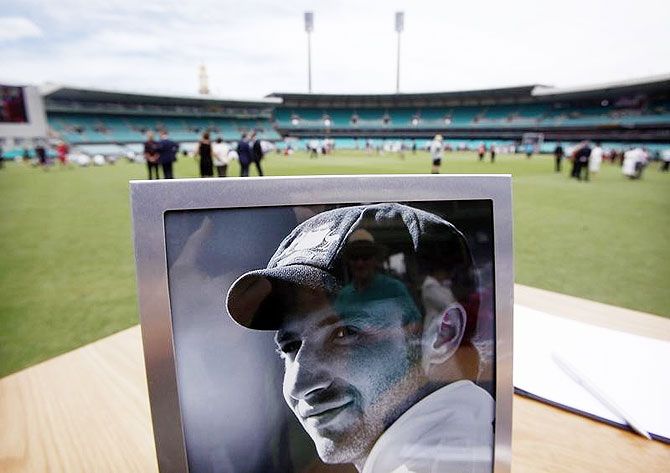 The third and final match of Australia's home series against New Zealand promises to push Test cricket into a brave, new world but players on both sides will also look back in sorrow a year after the tragic death of batsman Phillip Hughes.

Friday's opening day of the first day-night Test match falls a year to the day that Hughes died in a Sydney hospital at the age of 25 from a serious head injury, having been struck in the head by a bouncer during a domestic match.

The anniversary was brought into sharp focus late on Wednesday, when a young net bowler was struck behind his ear off the bat of Australia all-rounder Mitchell Marsh during the training session.

The bowler, a grade-level cricketer in South Australia state, was treated by Australia's team doctor and had stitches behind his ear but was not seriously hurt.

The incident caused considerable discomfort among the Australian camp and Marsh was visibly distressed.

"I was a little shaken up about it and I think a couple of the guys were as well," Australia captain Steven Smith told reporters at Adelaide Oval on Thursday.

"I think it was one year to the day since that horrible accident happened and I think it shook up a few of the players.

"Luckily, the guy was okay, he got a couple of stitches in the back of his ear but Mitch Marsh certainly hit that ball pretty hard and thankfully the net bowler is okay."

Smith, along with Australia's opening batsman David Warner and spinner Nathan Lyon, were at the Sydney Cricket Ground playing for New South Wales when Hughes promptly collapsed after being struck by a rising delivery.

Hughes died in hospital two days later, three days before his 26th birthday, plunging a nation and the cricket world into mourning.

Born in northern New South Wales and raised on a banana plantation, Hughes moved to South Australia to play Sheffield Shield cricket in a bid to re-boot his Test career.

His death struck hard in his adopted state and the first Test of the home series against India was switched to his home Adelaide Oval with the Brisbane match postponed to allow players time to grieve.

Australia and New Zealand players will wear arm-bands during the day-night Test in remembrance, which will also feature a video tribute to Hughes between sessions on day one.

"Obviously, it was a pretty difficult time for us all coming here last year just after the horrible incident," Smith said.

"I think for us now a year on we still have Hughesy in the back of our minds every time we walk out on the field.

"That's no different, a year on, here this week. We are going to do our best to play with a smile on our face and hopefully play well for Hughesy.

"Obviously, it's a tough time for his family and friends. we respect that, and hopefully we can have a good week for Phillip."

Hughes' death triggered a debate about safety in cricket, a sport in which fast bowlers routinely launch the ball at over 150 kilometres per hour at opposing batsmen.

The use of the pink ball, which has been specially developed for use in the day-night Test, has also raised safety concerns.

Though over seven years have gone into the pink ball's development, some batsmen complained of difficulty seeing it properly under floodlights after warmup matches in the leadup to the New Zealand series.

Others felt it might be difficult for fielders to pick up aerial shots when square of the wicket.

Smith said he felt there was no "huge difference" in playing red, pink or the white balls used in limited overs cricket.

His New Zealand counterpart Brendon McCullum was also relaxed about the unique challenges the match will present.

"You can’t safeguard against everything, I guess," McCullum told reporters.

"(Incidents) happen whether the ball’s red, white or pink."

© Copyright 2022 Reuters Limited. All rights reserved. Republication or redistribution of Reuters content, including by framing or similar means, is expressly prohibited without the prior written consent of Reuters. Reuters shall not be liable for any errors or delays in the content, or for any actions taken in reliance thereon.
Related News: Phil Hughes, South Australia, Adelaide Oval, Steven Smith, David Warner
COMMENT
Print this article