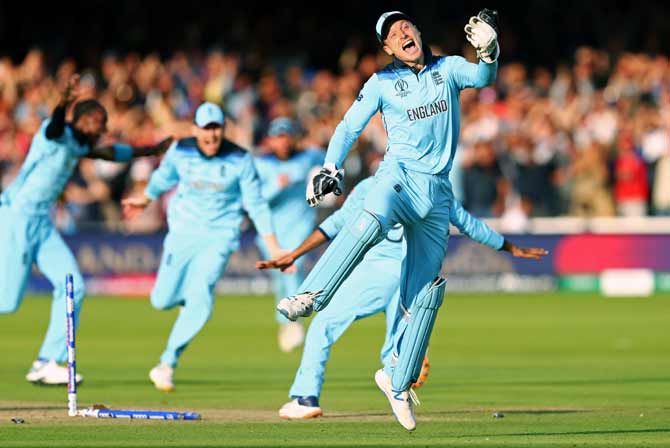 England found cricketing bliss by dint of divine intervention and Ben Stokes's brilliance, cracking a code that proved indecipherable for 44 years as history sliced through teary-eyed New Zealand's grasp in a final that will be remembered for ages.

England won it via Super Over on boundary count.

The game twisted this way and that till the very last ball, and beyond. Fittingly enough, the finale, inarguably the most gripping in the tournament's history, unfolded at a venue that is stepped in history.

In the end, it was England's superior boundary count – 22 fours and two sixes compared 16 by New Zealand -- that saw the 'Cup' finally coming to its spiritual home.

It was a good final delivery from Barbados-born Jofra Archer and Stokes's steely performance in a tricky 242-run chase that sent 60 percent of those present at the Lord's into raptures. 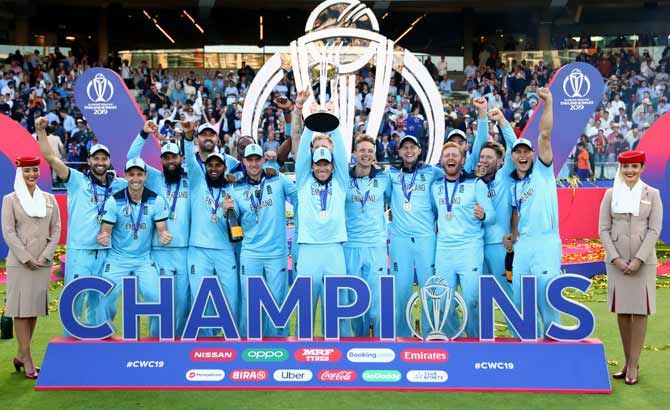 The other 40 percent had tears in their eyes for 11 committed souls who put their everything on the line. They did everything required from them but yet finished second best for the second time in four years.

The Indians cried, so did the Pakistanis and Afghans; they wanted to see crickets nicest men come first. It didn't happen, but they played a final to remember.

Batting second in Super Overs is always tough and even tougher if Archer is the bowler at the other end. Jeemy Neesham had other ideas as he got 14 but Archer's final delivery on the blockhole saw Martin Guptill fail to complete a second run.

Needing 15 in the last over, Stokes played two dots and then smoked Boult over deep mid-wicket for six, then got a lucky overthrow while running a double that fetched them six runs. That is where Providence intervened.

With three needed off two balls, Stokes ran a desperate two but non-striker Adil Rashid was way short of his ground, leaving the hosts to score two runs off the last ball. 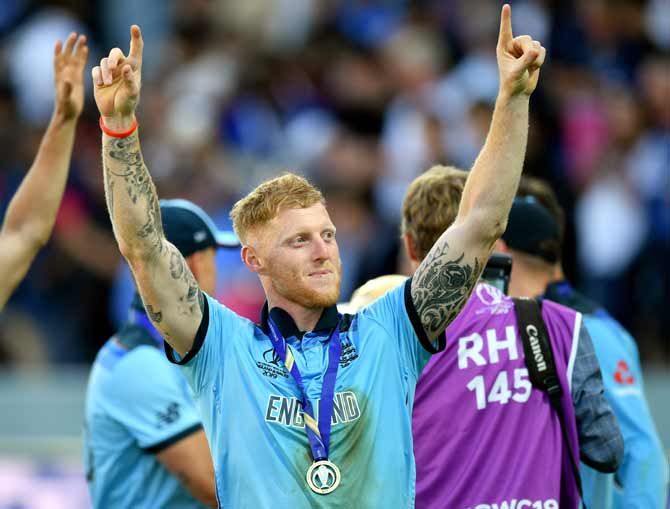 IMAGE: Ben Stokes scored 84 not out from 98 balls to help England tie the game and force a Super Over. Photograph: Michael Steele/Getty Images

Boult kept one full on Stokes's legs and he could only hit towards the long-on and two was never on as the bowler effected an easy run-out under pressure.

Stokes was left stranded on 84 as England were all out on 241, paving the way for the first ever Super Over of the World Cup.

Buttler (59 off 60 balls) and Stokes came together when England were precariously placed at 86 for four but they were not circumspect in their approach and kept the scoreboard ticking with singles and doubles. They waited for the occasional loose deliveries.

Buttler played some uppish drives in his six fours as they added 110 runs for the fifth wicket. Stokes was an able ally as they ran hard between the wickets and dropped anchor at one end.

Once Buttler was snuffed out by Ferguson and Williamson had to use one of his all-rounders, Stokes targeted Neesham to bring down the equation to 39 off 24 balls. 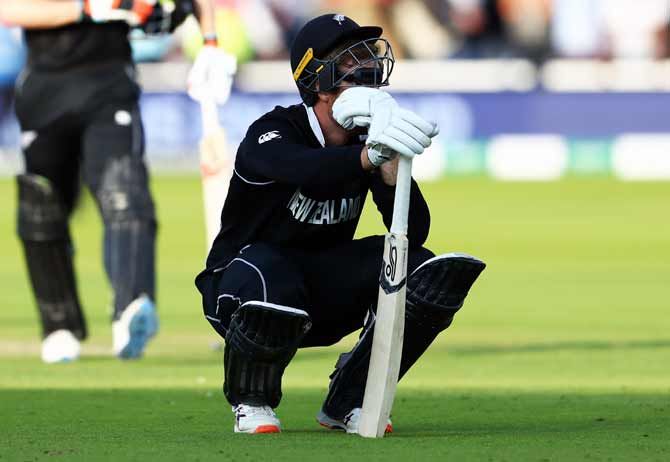 However, it was Ferguson, who again got one to climb big on Chris Woakes off his last over and Latham held his nerve to pouch the aerial ball to leave England at 203 for 6.

Having bowled the short ball, Ferguson used the slow cutters well to finish his spell with 3 for 50 off 10 overs.

With not many runs to defend, Williamson carefully bowled Colin de Grandhomme (1/25 from 10 overs) at one go while using others in short bursts.

Jason Roy survived a touch and go leg before appeal off Trent Boult before Matt Henry saw him off with a peach of fuller length delivery which was snapped up Tom Latham behind the stumps.

Joe Root  (7 off 30 balls) struggled all through before flashing at de Grandhomme delivery for Latham behind the stumps. 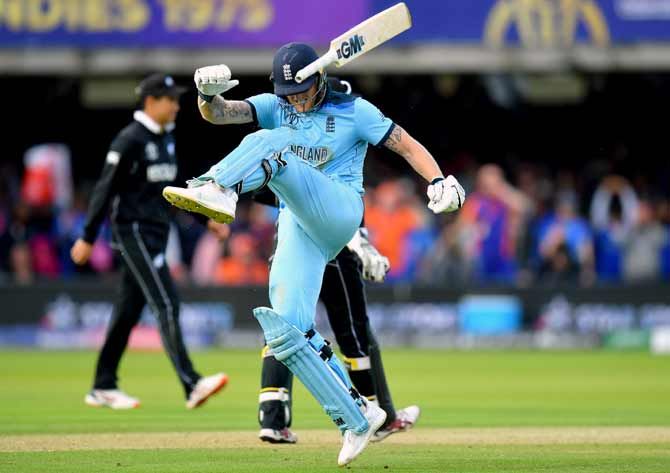 IMAGE: Ben Stokes reacts after the match finished in a tie with both teams finishing on 241. Photograph: Clive Mason/Getty Images

Jonny Bairstow (36) grafted on before Ferguson's extra pace and the bounce saw him drag one back.

When Eoin Morgan (9 off 22 balls) looked intimidated by Ferguson's pace and was moving towards leg-stump and finally flashed one off Jimmy Neesham to make it 86 for 4 before Buttler and Stokes joined forces.

Batting first, New Zealand once again put up a modest batting performance under overcast conditions to post 241 for eight as the England pace unit kept on asking probing questions. 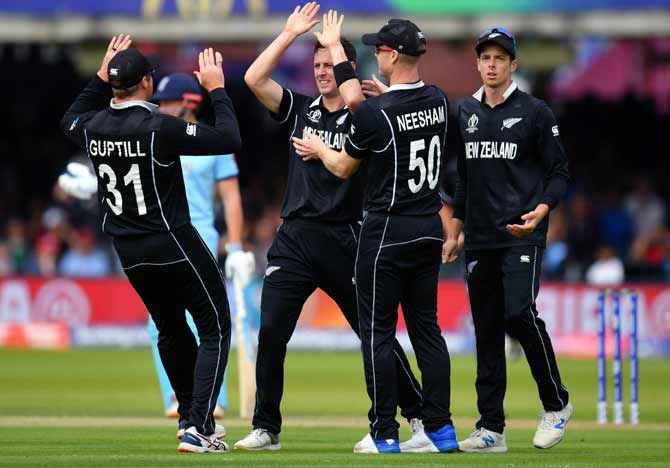 While Woakes had the best figures statistically, it was the tall Liam Plunkett (3/42 in 10 overs), who used the cross-seam variations effectively to stop the Black Caps on their tracks.

They would now be hoping that their pace bowlers use the conditions as well as the England bowlers did in the first half.

Only Tom Latham (47 off 56 balls) contributed in the middle overs in another mediocre effort from the New Zealanders on another big day.

Martin Guptill (19 off 18 balls) had started on a positive note but after surviving a caught behind appeal off Archer, he wasn't lucky the second time when Woakes got one to slightly shape in and he was caught plumb in-front. 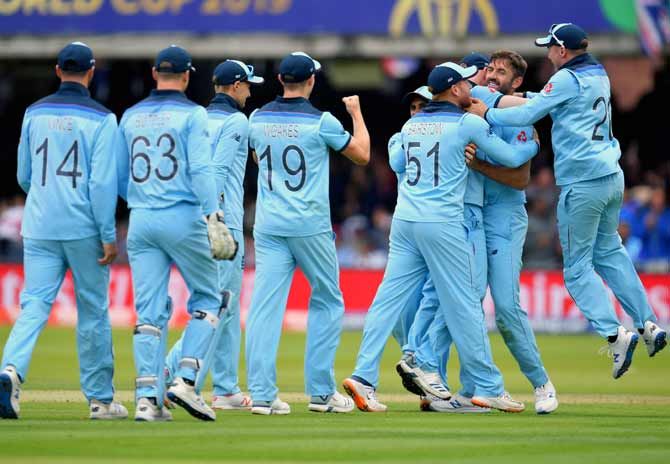 Williamson and Nicholls, just like the India game, were trying to preserve their wicket with occasional boundaries. They were steady during their 16.2 over stand without being spectacular.

It was Plunkett, who got the all important wicket of Williamson when the New Zealand skipper tried to play away from his body and the nick was snapped by Buttler.

Plunkett then removed another set batsman Nicholls with a cross seam delivery that had the left-hander playing on while shaping up for a big shot.