Imran Tahir finished with figures of 4 for 29, the best figures by a spinner in the tournament so far. 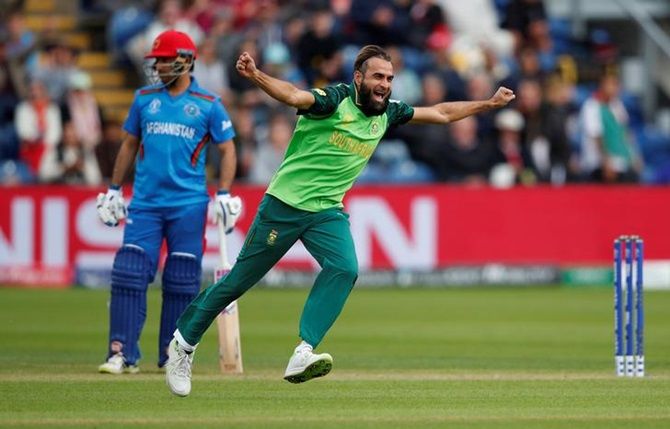 Defeats by England, Bangladesh and India had left the Proteas’ ICC Men’s Cricket World Cup hopes hanging by a thread and the no result on England’s south coast strained that single thread even further.

However, it did provide captain Faf du Plessis with some clarity. South Africa had five matches to go, he surmised, and each had to be treated like a cup final. One mistake and they were out.

For a side that arrived in England third in the ODI rankings this was a scarcely believable situation, even if they were not quite as hyped as the hosts, India and Australia before a ball had been bowled.

Indeed, this South Africa team had lost their global superstars, the ones who ensured they were installed as heavyweights in every ICC tournament they entered during the last two decades. But they also lost the players who carried the emotional baggage from painful disappointments.

Led by Du Plessis, the 2019 Proteas side was described as fresher, hungrier and fearless – typified by the excellent Kagiso Rabada, the fast bowler who made his ODI debut just weeks after the previous World Cup and had taken 106 wickets since. Cautious optimism surrounded their chances.

However, South Africa were overwhelmed in the first game by England, surprised by a punchy Bangladesh three days later and then outclassed by an outstanding India.

Afghanistan, and their dangerous bowling attack, were next in what had become South Africa’s biggest game of the tournament. It was time to sink or swim.  So, step forward Imran Tahir.

With rain in the air and a pitch so green in patches that it matched South Africa’s bright shirts, Tahir’s leg-spin was surely the one weapon Du Plessis was not expecting to deploy.

But Rabada, for his all his might, could not find the edge of the Afghan bats – despite whistling several bullets narrowly by – while Beuran Hendricks finished wicketless after struggling to find the right length.

Hazratullah Zazai, a big-hitting Afghan opener who mirrors his game on Chris Gayle, dealt with the new-ball bowlers comfortably and crashed three impressive fours to the boundary. The fact he got out, caught while trying to heave a Rabada short ball into the River Taff, was more down to luck than South Africa’s judgement.

Afghanistan reached 69/2 and seemed well set – even if they then lost their third wicket, Hashmatullah Shahidi edging Andile Phehlukwayo to slip for eight, in the first over after the second rain delay.

Du Plessis, seeking something different, threw the ball to his leg-spinner and he duly did the rest.

Noor Ali, a 30-year-old opening batsman, knows a thing or two about spin – his nephew is Afghan off-spinner Mujeeb Ur Rahman after all – but he was made to look like an out of form club player when Tahir served up a googly with his first ball that gripped and then ripped past his bat, clattering his off stump.

Tahir’s celebration almost included a lap of honour, such is the burst of energy he got. But, now aged 40, he thought better of it and returned to deliver an encore that was even better.

Asghar Afghan was outfoxed, chipping Tahir’s sixth delivery straight back to him for a simple caught and bowled. With the thick clouds parting, the sun began to shine – on both the Cardiff Wales Stadium and South Africa’s World Cup.

With Phehlukwayo and then Chris Morris joining in the fun and taking wickets, Afghanistan, desperate to put a competitive total on the board, played with increased urgency.

But the reward that comes with attacking Tahir never quite outweighed the risk. Gulbadin Naib mis-judged a quicker delivery, shorter than the spinner would have liked, and pulled it straight to Aidan Markram.

Rashid Khan, Afghanistan’s own supreme wrist bowler, clubbed 35 runs from 25 balls but even he, with his own specialist knowledge of the art, could not survive for long – picking out Rassie van der Dussen on the boundary after failing to get hold of another quicker ball.

They finished 125 all out and Quinton de Kock and Hashim Amla, confidence restored, led the run chase as South Africa chalked up their first win by nine wickets.

Tahir finished with 4/29, the best figures by a spinner at the tournament so far from a spell that knocked the stuffing out of Afghanistan.

Tahir and his teammates celebrated boisterously, this was more than just a win. They celebrated like they had won a cup final – one down, four to go.