Imad Wasim scored an unbeaten 49 and took two wickets as Pakistan beat Afghanistan and won their third game in a row. 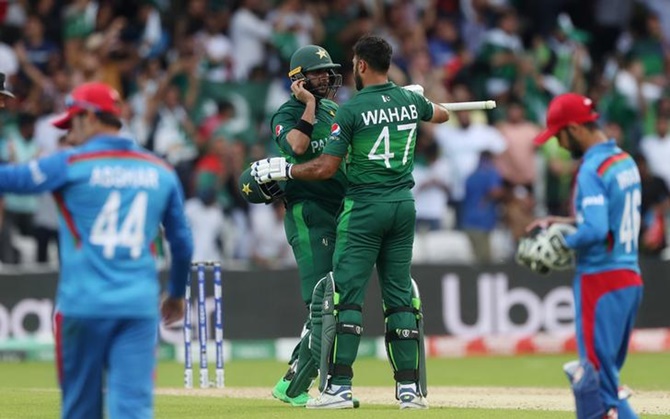 Pakistan’s Imad Wasim wasn’t remotely fazed by guiding his side to victory over Afghanistan, simply saying it was his turn to be match-winner at the ICC Men’s Cricket World Cup 2019.

After captain Sarfaraz Ahmed was run out going for an ill-judged second, it was left to Imad and the tail to haul Pakistan up to target of 227 and a vital victory keeping knock-out ambitions alive.

Haris Sohail and Babar Azam, key men in successive wins over South Africa and New Zealand, took a back seat as Imad compiled 49 not out – nervelessly, according to the 30-year-old himself.

"I wasn't nervous, it wasn't like that," said Imad.

“We have very good players and I knew if one of us stayed in, we’d get to the target.

"It just happened. Rashid (Khan) was bowling brilliantly and our plan was first not to give him a wicket, and then we could target the rest.

"I think there were some bad shots played, but the guys have won us games may times and it had to be someone else.

"They won the last game and a couple of others chipped in to win this one. These situations happen in cricket but it shows great team unity that we are all contributing.”

Imad fulfils a key role in balancing Sarfaraz’s side but his performances at the World Cup have been solid rather than spectacular, dropping out of the team to face England in their second outing.

He was again unbeaten for 46 in defeat to India, showing his ability to shepherd the lower order and against Afghanistan his skiddy left-arm darts yielded two wickets for 48 runs in ten overs.

Afghanistan strangled a Pakistan middle-order that has performed well of late and Imad hailed their performances across the tournament, particularly their bowling attack.

"The Afghan spinners, they are world-class,” he said.

"Credit must go to Afghanistan. They have risen up in five years and given a tough time to every team.

"They gave us a tough time and India a tough time. Afghanistan will be a force to be reckoned with in a couple of years’ time.”