'Lathi-charge wrong but police will retaliate if you throw stones'

'If you are protesting peacefully, then there is no problem, you have all the rights.' 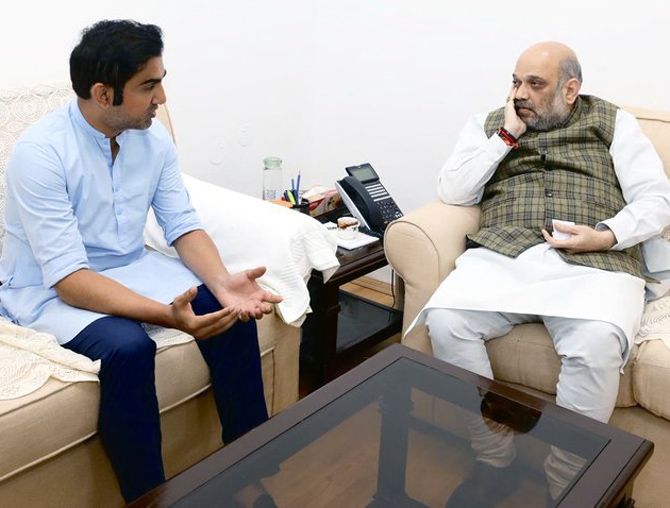 Cricketer-turned-politician Gautam Gambhir on Tuesday criticised the use of force against students but said police will have to retaliate if "unwanted elements" indulge in violence.

"I said lathi-charging students is wrong but if something has happened due to self protection then it is not wrong," said Gambhir when asked to comment on the police crackdown on students of Jamia Millia Islamia, who were protesting against the Citizenship (Amendment) Act.

"If you are throwing stones and burn public properties then police will retaliate in someway. If you are protesting peacefully, then there is no problem, you have all the rights.

Scores of protesters, including Jamia students, police personnel and locals were injured, four DTC buses torched and over 100 private vehicles and 10 police motorcycles damaged in the violence that took place during the protest against the controversial bill on Sunday.

Angry over police crackdown, thousands of students on Monday took to the streets demanding a probe into the use of teargas inside the Jamia university's library as well as police entering the campus without permission from university authorities.

Protests were also seen in various other institutes across the country from Kerala to West Bengal and Telangana to Uttar Pradesh as the day progressed.

Talking about the act, Gambhir said: "Rumours that are being spread that this bill is against Muslim, it is wrong. This bill is about giving citizenship not taking away citizenship."

Several states in the northeast and West Bengal have been rocked by violent protests over the act, which seeks to provide citizenship to minorities in Pakistan, Afghanistan and Bangladesh.