'If there is no case against Sreesanth, the BCCI's ban is totally unjustified'

'The entire BCCI order was based on the Delhi police's chargesheet.'

'Neeraj Kumar shouldn't be part of any BCCI committee that will look into lifting the life ban on the three cricketers.' 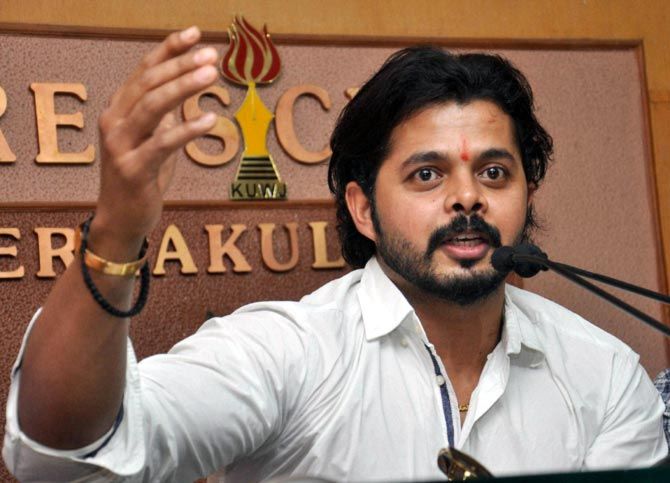 The spot-fixing scandal in the sixth edition of the Indian Premier League in 2013, in many ways, was an eye-opener for Indian cricket.

India fast bowler Shantakumaran Sreesanth and his Rajasthan Royals teammates, Ankeet Chavan and Ajit Chandila, were arrested by the Delhi police during the Twenty20 league for allegedly agreeing to fix matches, shocking followers of the game.

The trio spent many days in Delhi's infamous Tihar Jail and were subsequently banned for life by the Board of Control for Cricket in India.

July 25, after a two-year legal battle and time spent in isolation, Sreesanth, Chandila and Chavan were absolved of all charges by the Patiala House Court in Delhi, which held that the police had failed to make out a case against them.

The court said the police was also unable to substantiate charges under the Maharashtra Control of Organised Crime Act, 1999, MCOCA, and the Indian Penal Code. It held that there was no evidence in the case, in which the Delhi police first filed a 6,000-page chargesheet against the accused and later came out with a supplementary chargesheet.

Sreesanth's lawyer, Vishal Gosain, discussing the judgment with Harish Kotian/Rediff.com, explains why the Delhi police's charges were rejected by the court.

He also urged the BCCI to immediately let the Kerala pacer resume his cricket career since the life ban it imposed on him was based on the Delhi police's report that was dismissed by the court.

Sreesanth was discharged of all charges in the IPL spot-fixing scandal, but the BCCI is still not ready to lift the ban imposed on him. Do you find that surprising?

Yes, it is quite surprising. I just fail to understand their stand, especially when he has been exonerated of all allegations. In a sense, it has vindicated our stand there was nothing against him.

The Delhi police authorities had been giving selective leaks to the media in order to prejudice this case. Given the fact he has been absolved of all charges, it is my view that they (the BCCI) should not debar him from playing cricket.

If there is no case against Sreesanth, why isn't he entitled to participate in cricket? I think the BCCI's ban is totally unjustified.

Neeraj Kumar was the Delhi police commissioner when the IPL scandal broke and Sreesanth and his two Rajasthan Royals teammates were arrested. Neeraj Kumar now serves as advisor to the BCCI's Anti-Corruption Unit. Would you say it is unfair on the three cricketers if he is part of the unit or made party to any decision on lifting of the life ban?

It is my personal view that he should not be part of any committee because at the time when the IPL fixing case was instituted by the Delhi police he was heading the police unit. From 2013 till today it has been our consistent stand that the Delhi police did not have even any material or evidence against Sreesanth.

In fact, when we were in the process of moving for Sreesanth's bail in 2013, they suddenly invoked MCOCA to curtail our right to secure bail. But MCOCA has been thrown out of the window by the sessions court, holding that there is no material justifying the invocation of it.

I don't think Neeraj Kumar should be part of any BCCI committee that will look into lifting of the life ban on the three cricketers.

Neeraj Kumar cannot be above the court order. This is a court of competent criminal jurisdiction which has dropped all the charges and any report now by any individual at the end of the day can only be his personal opinion, not a finding of the court.

What next for Sreesanth if the BCCI does not lift the life ban? Can he approach the court?

Well, his next step will be his personal call. I don't know whether he intends to challenge the order of the BCCI or not. Technically, the ban can be challenged in a court of law, but whether or not he proceeds with the challenging process I don't know; it his personal choice.

To the best of my knowledge, and I also read it in some of the newspapers, he doesn't intend to challenge the BCCI legally; he is in the process of making a request to the BCCI officials to allow him to play.

I think it is about time they should consider his request. They should look at things in proper perspective instead of getting prejudiced by some selective leaks which have been given to the media.

Ravi Sawani, the BCCI's former ACU chief, in his judgment of September 2013 banning Sreesanth for life, said Sreesanth had confessed to him of being part of the fixing scam only due to the enormous pressure he was put under by the Delhi police.

Did the Delhi police torture the cricketers in custody or make false promises and force them to confess?

First things first: The very same confessional statement (as claimed by the Delhi police) has been thrown out of the window by the court, which has the powers to ascertain what is the evidential value of that statement.

Now the entire BCCI order was based on the Delhi police's papers and, for your understanding, any confession made by an accused while being in custody is inadmissible under law.

So if the Delhi police, by putting pressure on Sreesanth, had extorted a confession, or for that matter pressured him to confess to something, it does not mean that it becomes sustainable in a court of law.

Coming back to the court proceedings, if they (the Delhi police) had any case or any legs to stand on there is no reason why the judge would not have passed an order charging Sreesanth and the other players with some kind of offence under the IPC or MCOCA.

But the judge found out that there is nothing because a confessional statement is inadmissible in a court of law.

Well, about the torture part, I can't tell you; that only Sreesanth can say. But, yes, when he has said that he was put under some kind of pressure to give his statement, then, of course, he must have been compelled to give the statement or must have been under duress to do so.

In any case, the bottom line is that whether or not he has given any statement under custody to the Delhi police confessing his involvement, it is immaterial now because that statement is inadmissible.

In fact, any statement made by an accused in police custody is inadmissible unless it leads to some kind of recovery. It is a matter of record that no incriminating material was recovered from Sreesanth... no money, nothing!

I am saying this as a matter of record; there is no conversation between Sreesanth and any of the bookies. 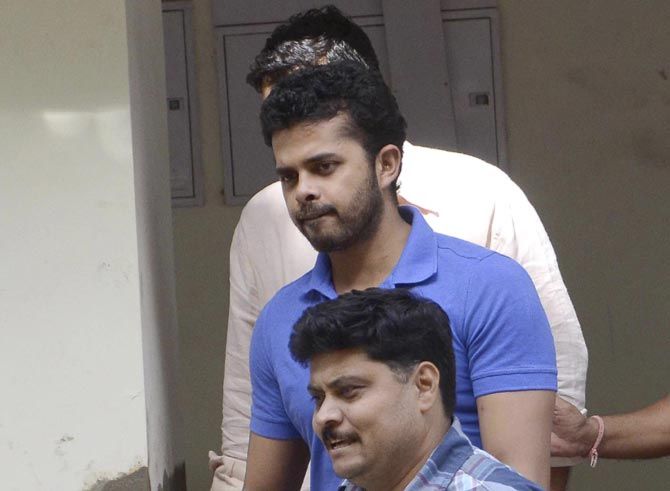 IMAGE: Shanthakumaran Sreesanth is taken to court by police personnel in New Delhi, May 2013. Photograph: Reuters

But the Delhi police reportedly claimed that Jiju Janardhan, Sreesanth's friend, was named as the link between the bookies and him. How do you react to that claim?

Well, Jiju's conversation can't possibly implicate Sreesanth because Jiju is talking to somebody in isolation. The Delhi police has not disclosed to the media that there is a conversation which is part of the record, even if it is assumed that some conversation had taken place between some bookies; the conversation suggests that Sreesanth could not be contacted.

The 'white towel' signal to the bookies and the alleged fixed over Sreesanth was supposed to bowl in an IPL match... What happened to those Delhi police claims?

You see the point is very simple. Their entire case was that there was an understanding that he would concede 14 runs or more in that particular disputed over. He ended up conceding 13 runs. So the question is if he was involved, then there is no reason why he would not have bowled a no-ball or a wide delivery to complete the cheat.

The fact of the matter is that he did not. So where is the question of his involvement?

I can understand if there was some direct conversation between Sreesanth and somebody showing his participation in the entire conspiracy, or the so-called conspiracy, but there was none.

So this is just a figment of some people's imagination. The Delhi police wanted to put up a case and because he was an international cricketer he was named in the case. The court has found nothing against him to justify the framing of the charges.

Are you surprised that having represented India for so many years, the BCCI did not come forward to support Sreesanth or hear him out when he was charged by the Delhi police?

Absolutely! I find it very surprising. On the contrary, there are some voices within the cricketing fraternity, and Sourav Ganguly is one of them, who have said that if he is discharged by a criminal court, then he should be allowed to play.

I have also learned that the Kerala Cricket Association has come out in support of Sreesanth.

Sreesanth will feel aggrieved since he has lost two years at an important stage of his career. Is there an option for him to file a defamation case against the Delhi police for what many believe was a shoddy investigation?

But, yes, the option is available for him to file the defamation case.

Do you think he should file the case?

I can only advise him, but can't make a statement on his behalf. It is entirely his call.

The Delhi police can appeal against the judgment in a higher court.

Let them approach the high court. We will fight it out tooth and nail even in the higher courts. As of now, there is no case against him; he has been cleared of all charges.