While India has had a smooth passage to the quarter-finals, Ravi Shastri's claims of India retaining their title seem a tad premature, if not far-fetched. Uttam Ghosh/Rediff.com looks at the lighter side of things. 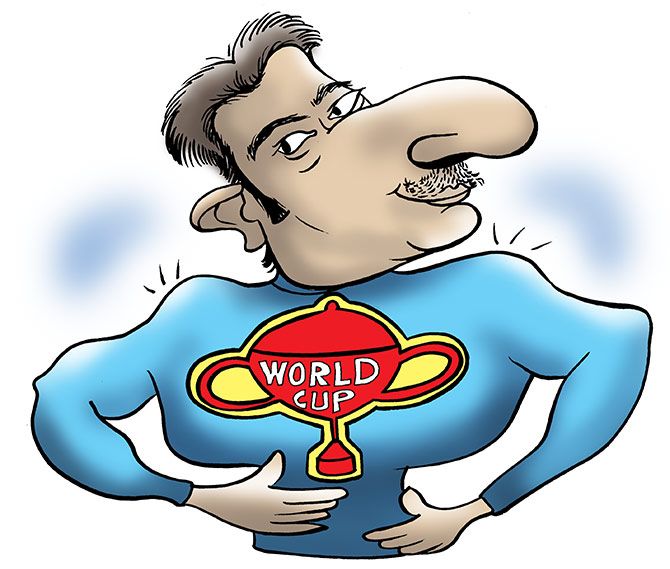 A limited sport, by all means, even the ongoing ICC World Cup has just 14 participating teams, about half of them playing the sport seriously and the other half mostly there to fill the numbers.

Besides, only the Asian countries seem to be passionate about the sport, and, among them, only India has the financial muscle, bringing in the moolah.

No wonder the ICC has decided to reduce the number of teams to 10 in the next edition.

It is to India's bane that despite the obvious advantage it has never been able to dominate the game like the mighty West Indies of the 1970s and 80s or the Australians of the 1990s and early 2000s.

Nonetheless, the Men in Blue did manage to win the World Cup on home soil in 2011, ending a 28-year-old drought, and in the ongoing edition have so far won all their six group matches.

In fact, the Indian winning streak now stands at 10, the team having not lost since the reverse against South Africa in the last edition.

This has prompted Ravi Shastri, the team's director, to make a tall claim.

‘We were never here to fill in the numbers. We are not going to give any chances to any of our opponents and we are going to lift the trophy,’ he was quoted as saying by the media.

On the surface, the former Indian captain's claims may seem valid.

The wickets Down Under have been very subcontinental. Large scale migration has ensured Team India gets more crowd support than even the home countries. And, without taking anything away, the team was in a relatively weaker group.

On the flip side, Mahendra Singh Dhoni and Co haven't been actually tested in the group stage.

Save Virat Kohli and Shikhar Dhawan, none of the other batsmen were consistent. It won't be wrong to say should the batsmen struggle to put the runs on the board, the bowlers will look hapless.

Those six relatively easy wins leading to complacency cannot be ruled out.

Moreover, India is playing Bangladesh in the quarter-finals. Another cakewalk for sure.

In such circumstances how well is Team India prepared to face more consistent sides like Australia, New Zealand and, for that matter, South Africa?

The fact that they have not been challenged so far can clearly go against them.

In such a scenario is Shastri's over-confidence justified?